It’s All Coming Together 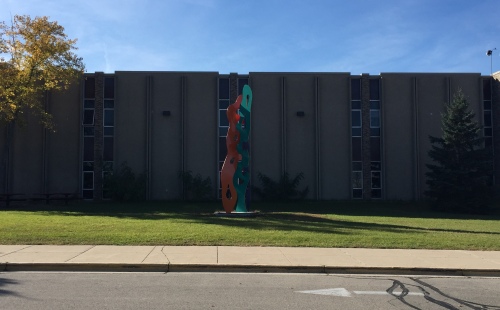 What’s the origin and meaning of the new sculpture?

When a new 20-foot tall sculpture appeared outside of the West Bend High Schools auditorium last spring, students were left wondering how the creation got there and what it meant.

East juniors Meredith Vande Zande and Adam Gumm were both confused about the origin of the sculpture.

“Who did it? Why was it there all of a sudden?,” Vande Zande said.

“Where’d it come from?,” Gumm wondered.

It turns out that this sculpture was a donation from the group West Bend Friends of Sculpture, whose mission is to “capture the spirit of the community and express it in public art,” according to its website. The art piece is on permanent loan to the school. 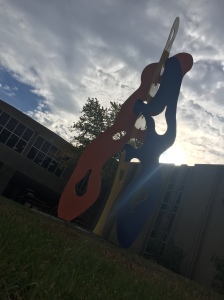 “We had commissioned [artist] Narendra Patel to create the sculpture, but we didn’t have a location. A school board member approached us about having it with the Silver Lining Arts Center. We thought it was a nice fit,” said Shawn Graff, Friends of Sculpture executive director.

The piece is valued at $42,000. Leaving such a valuable work of art outside of a high school with students occasionally known for creating mischief might seem risky. However, Graff is not concerned. “It’s made out of steel and industrial paint. It’s very durable and well-built,” he said.

The sculpture, created by Patel, weighs 8,000 pounds. It is named “Confluence,” and can be interpreted many different ways.

“I thought it was supposed to represent the two schools uniting,” said West junior Leah Gudex.

Neitzke thinks the sculpture has the perfect name. “‘Confluence’ is a great description. If you look at it, it represents all these different people, groups, things that happen at the high school, all flowing together. So, it represents so many different things, and that’s the beauty of art.”

One response to “It’s All Coming Together”