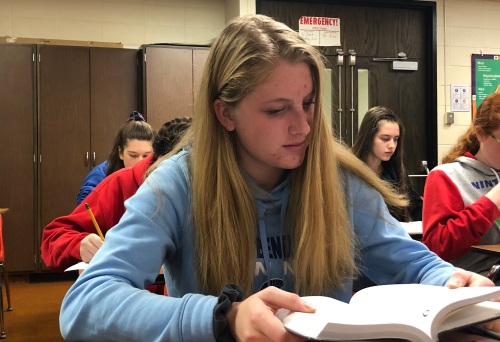 Before last week, Kayla Lemens had never been afraid to come to school.

Lemens is just one of the many West Bend High Schools students to be struck by fear in response to the stream of shooting incidents and perceived threats that swept across southeastern Wisconsin schools at the start of December. West Bend, along with other neighboring districts, saw a number of rumored and investigated threats. Shootings in Waukesha and Oshkosh high schools additionally fueled anxiety across the local community.

Though she knew that the odds for such an act of violence to occur at her school were slim, Lemens, a sophomore at West High, still felt it necessary to be cautious throughout the week.

West junior Abigail Wichlacz also had difficulty focusing during her classes. Outside of school, she experienced trouble sleeping at night due to heightened anxiety.

“I’m absolutely terrified,” Wichlacz said last week. “It’s scary thinking that something like that could happen here. I read a lot of the stories about stuff happening in (Los Angeles) or in this Philadelphia school, or Florida even. It’s so near and that it’s so probable now that it’s terrifying to think about.” 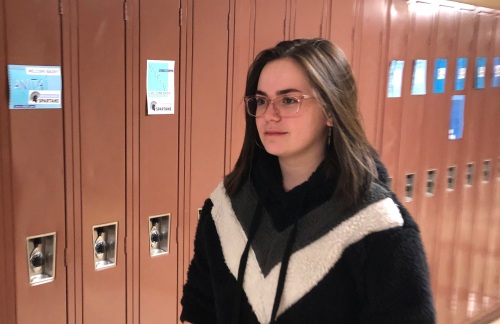 Some students, however, were not concerned or fearful about the possibility of an armed shooter. West senior Noah Doedens credited this to the swift response of the administration and law enforcement.

“I actually think that the last few days will be the safest our school will be the entire year,” Doedens said on Saturday. “Previous school shootings around the country often have come without warning, so with the increased police presence at our school this past week, I actually felt safer than I would normally.”

Even with the additional police officers in the building, West senior Aananya Saini explained that she still felt tremendously unsafe. She had been one of the many students to skip school Dec. 2 out of fear that the rumored shooting would happen. Saini, whose family is from India, added that she was particularly concerned that she would be made a target due to her minority status.

“Just being a minority kind of makes me feel uncomfortable most of the time, but the fact that the shooting epidemic has spread up here, that makes things worse,” Saini said.

Saini described that when she is in a classroom, she tries to sit next to a window so that she may easily escape if there is a violent situation. When navigating the building, though, she purposefully chooses routes that have minimal doors and windows so that she cannot be targeted from outside.

“I try not to walk in the main hallway because there’s a lot of people, so if something does happen, it’s going to be chaotic and people are going to be fighting,” Saini said.

Like Lemens and Wichlacz, Saini also had a difficult time focusing on her coursework last week.

“It was a very tense environment,” Saini said. “I felt like I learned nothing, which is really bad.”

For the first few days after the fear gripped much of the WBHS student body, East social studies teacher Michael Lewandowski chose not to discuss campus safety with any of his classes. He says that he tried to present that an active shooter situation would not happen at WBHS.

“I felt concerned for the kids because I knew they would be thinking about it,” Lewandowski said. “I tried really hard to give an appearance of normalcy, so I didn’t even talk about it for the first couple days at all.”

Initially, Lewandowski thought he was helping students by avoiding the topic altogether, but he started to overhear several students make comments about their anxieties. At the end of a class period, he heard a student express trouble focusing because they were worrying about possible threats. That’s when he knew he had to say something.

“The next day, I talked about it in class, about what our plan is to make sure they knew that we have a plan to deal with it,” Lewandowski said.

To each of his classes, he explained a general plan of what they might do if there was a shooter in the building. He emphasized that his students be aware of their surroundings, but he also covered some ideas that he learned during his ALICE (Alert, Lockdown, Inform, Counter, Evacuate) training two years ago, when staff members practiced what they would do in different intruder scenarios.

“Run if you can, hide if you must and fight if you absolutely have to,” Lewandowski said.

He says his first priority would be to get the students out of the building, if possible. Still, he’s unsure that anyone would be truly prepared in the event of a shooting.

“No one knows exactly what they’re going to do in that situation,” Lewandowski said. “I strongly believe that the teachers would do everything in their power to make sure that students are safe. The teacher’s going to make the decision based upon what the safety of the student is, and as long as the students understand that, we’re going to do the best that we can in the moment to protect them.” 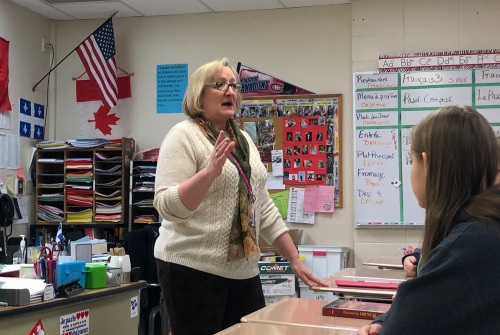 East French teacher Christi Fischer similarly does not think that a school “can ever be really prepared,” but she thinks that WBHS is considerably safe. Beyond having on site police liaison officers and other security measures, Fischer thinks that the teachers’ ability to form strong relationships with students can play an important role in campus safety.

“We are pretty good at relationship building with students in West Bend,” Fischer said. “We know that kids who are in touch with people are less likely to do acts of violence like this. It’s the kids who are marginalized and feel alone and disconnected that are. So I really feel that the relationships we have with students help make it a safer place because we kind of have our fingers on the pulse of kids that we are concerned about.”

Fischer compared the issue of school safety to terrorism in Europe. The threats of European terrorists have stopped many from traveling to the continent, just as Fischer knows that some teachers have considered leaving teaching due to fear of school shootings.

“You never know what could happen for sure,” she said. “We live in an unsafe and an unsure world. But if you let that inform your daily life, what kind of life do you have? If you live in fear, then the people perpetrating these kinds of crimes have won. Their goal is to make people afraid, and then they’ve won. I personally refuse to give into that.”

Schloemer works at Northshore Clinic and Consultants in West Bend and is one of the advisers of SAGA (Sexuality and Gender Alliance) at WBHS. In addition to holding a trauma certificate, she has a bachelor’s degree in psychology and a master’s degree in educational psychology.

Because she has a child at the high schools, she received an email from the district on the evening of Dec. 1 regarding an investigated shooter threat. She was immediately concerned for how students would feel going to school the next day and how their anxieties might manifest themselves. Some of her clients are students at the high schools, and they have reported higher levels of anxiety since last week’s events. 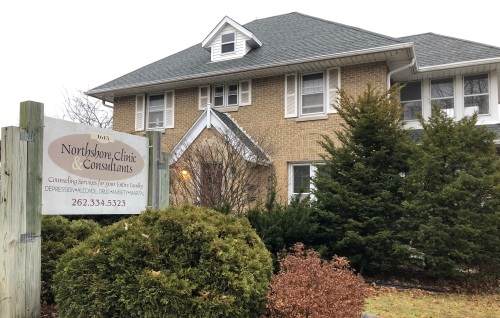 Local therapist Shana Schloemer, who has clients and a child at the West Bend High Schools, works at Northshore Clinic and Consultants in West Bend. Photo taken today by Samantha Dietel, Editor in Chief.

As the days passed, Schloemer was deeply unsettled by what she deemed a clear emotional escalation.

“We were actually seeing, in my opinion, around the state, there might have been reactions that could have been connected,” Schloemer said. “Not in a conspiracy way, but in a ‘my anxiety is heightened, therefore I feel I should bring a gun to school, or I should make jokes about threats, or it’d be funny to make a prank about a threat.’ I think that’s some of what we might have seen.”

To help relieve this heightened anxiety, Schloemer suggests that parents have discussions with their students about their feelings of safety at school so that any fears are not bottled up. She explained that if children do not feel safe when they are at school, it will be impossible for them to truly learn, since their brain will be unable to focus properly. If a student is unable to communicate their fears to a parent or guardian, Schloemer encourages students to go to a trusted adult at school.

Schloemer added that because of all the fears that fed into each other as rumors spread and threats struck neighboring schools, she is unsure of an exact timeline that it will take for all WBHS students and staff to be at ease.

“I think it is going to take a little while for people to fully feel calm again,” Schloemer said. “I think we need to have some distance from that to be able to process everything that happened and feel like we’re resetting ourselves.”