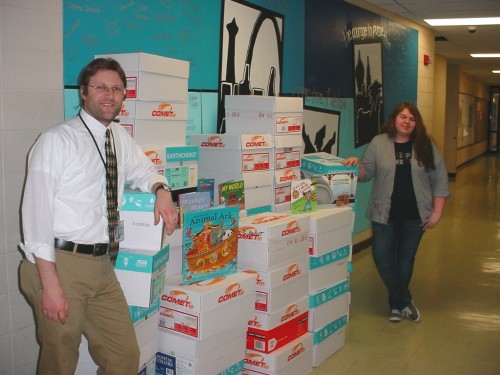 As a West social studies teacher, Mark Drake often finds himself buried in books. Just not thousands of them.

The WBHS Model UN, which Drake advises, helped raise donations for Reach Out and Read, a charity dedicated to battling childhood illiteracy in America.   The high schools collected an amazing 2,688 books and raised $543.50 by the end of a week-long book drive, which ended March 7.

Reach out and Read is a nonprofit organization whose mission is to prepare America’s youngest children to succeed in school. This is the first time that Model UN has conducted a book drive to support this organization.

After the week was over, West English teacher Kate Colwell donated more books, bringing the grand total to more than 3000 books.

“We originally hoped to collect around 500 books, so we were really happy with the final result. We achieved so much for this foundation,” said Rachel Ruplinger, Model UN officer.

Fifty teachers throughout the school participated, placing boxes in their classrooms and explaining to their students how children would be positively affected by their donations. Model UN held a contest for the most donations, with the winning class awarded a pizza party for their contributions.

Colwell and her students collected over 600 books, making them the greatest contributors in the book drive, and the winners of the pizza party.

“This book drive was more successful than we could have imagined.”
– Mark Drake, Model UN adviser

Model UN also is pleased to announce that $203 was raised by Family Living teacher Sally Heuer through three days of Nifty Nibble sales.  The Nifty Nibble is an in-school restaurant that provides authentic experience for culinary students.

The club was very pleased with the results.

“This book drive was more successful than we could have imagined. Many of the Model UN members have even said that they want to do this again next year,” said Drake.

Model UN decided to conduct this book drive in response to the United Nations’ goal of expanding childhood education. Not only did Model UN raise donations, but they also conducted multiple activities during the week that promoted reading on the WBHS campus.

On Monday, March 3, Model UN had teachers read children’s books in the library. Books such as The Little Engine That Could were read. Parth Trivedi, East senior and Model UN officer, said, “I think this was a great activity because it reminded students of their childhood. They grew up reading those books.”

Model UN also had poetry readings after school in the cafeteria. Students were able to express themselves by sharing a personal work with an audience.

On Friday, there was a literary character costume contest. There were three winners, each a ninth grader dressed in excellent costumes.  Sarah Legate dressed as Hermione from the Harry Potter series, Krystal Hakes went as the man in the yellow hat from Curious George, and Abby Seymer’s costume was Cecil, from Wizard Barristers.

Reach Out and Read distributes approximately 6.5 million books annually, and WBHS is proud to say that it had so many students contribute to a great cause.

(Photograph by Jesse Bauer, special for The Current.)