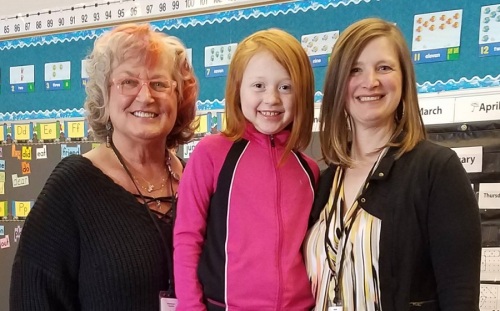 New job for area mom leads to a surprising reunion

Karen Carlson is back on the playground at Jackson Elementary School, this time with a whistle.

Carlson, who was hired last October as an instructional aide, has many connections to Jackson. She attended the school for grades one through four in the 1980s, has three children who went there (including two right now), and currently lives right across the street from the school.

“My family and I moved back to Jackson in the summer of 2016,” Carlson said. “We actually live on the exact same street that I lived on as a child, just on the other end of it.”

Life has been an interesting cycle for Carlson, who has lived in many places, including Chicago and Atlanta, since graduating from West Bend West High School in 1994.

“Strange how life sometimes brings you right back to where you started,” she said.

Carlson’s youngest daughter, Evelyn, is a first grader at Jackson and last month had a substitute teacher that surprisingly turned out to be a familiar face. The sub, Mary Mayer, was actually Carlson’s first grade teacher more than 35 years ago.

“It was a special day seeing my daughter being taught by my first grade teacher in my old elementary school,” Carlson said. “We made sure to get a picture to commemorate the moment.”

That wasn’t the first time that Carlson was able to reconnect with Mayer. They also crossed paths one summer when Carlson was helping out with summer school at Green Tree Elementary School, and she was placed in Mayer’s classroom.

“On my first day I walked in the room and I thought, ‘My goodness she looks extremely familiar, and her voice! I know that voice!,’” Carlson said. “It took me a second to figure it out because her last name was different than when she was my first grade teacher, but finally it clicked. I asked her if she used to teach at Jackson, and she said yes. We had a great reunion after that!”

Carlson says that Mayer was her favorite teacher at Jackson, and remembers her being colorful and larger than life, always providing a safe and joyful classroom.

“I feel like I can see her reading a story to us, completely animated and putting her whole self into that book so that we, her students, would learn to love books as much as she did,” Carlson said.

“Strange how life sometimes brings you right back to where you started.”
– Karen Carlson

“Those spelling bees were my favorite part of the week because I was an excellent speller,” Carlson said. “I was always one of the last kids standing, if not the winner. Those bees were a huge confidence booster for me.”

Her favorite subject, though, was physical education. Carlson had lots of energy and would run into class with fierce determination.

“Whether it was climbing to the tops of those thick ropes hanging from the ceiling, running and jumping through a maze pattern of hula hoops and orange cones, or playing a game of dodgeball, I was all in,” Carlson said. “Even though I was a girl, I played hard, and was determined to prove that it didn’t matter that I was a girl.”

The echoes between Carlson’s past and present often make her think about what it all means.

“I never thought, when I was playing on the playground here, at Jackson Elementary, that one day, as an adult, this little street, in this little village, would one day make me ponder life’s existential questions,” she said.