In response to the flood of school shooting incidents and perceived threats that sparked fear across southeastern Wisconsin at the start of December, the West Bend School District has been working in conjunction with local law enforcement to implement new safety measures at WBHS. While some new procedures have already been enacted, more are to come next month after students and staff return from winter break.

“It truly was an extremely, extremely difficult week and it’s one that I hope you never have to go through again,” Superintendent Don Kirkegaard said at the Dec. 9 school board meeting.

Beginning with the new year, both East and West main entrances will be open from 6:45 a.m. to 8 a.m., but the East entrance will close from that point on. Students, staff or any visitors will then have to enter through the West main entrance.

The district also plans to have one or two trained security personnel to ensure additional support at the doors. Right now, WBHS is equipped with several police liaison officers who patrol the building, as well as support staff who work the visitor desks at the main entrances.

“The people who we have hired now, while they’re trained to some extent, we are living in different times than when some of our people were hired,” West principal Ralph Schlass said. “So (the new personnel) will be trained specifically to focus on school safety and security.”

A new district safety coordinator position has also been created. Once hired, their office will be housed in the WBHS building. The district hopes to fill the position as soon as possible.

At the start of the new year, the district plans to have the Raptor Visitor Management System configured for all WBSD schools in order to instantly complete background checks into any guests entering the buildings. This system can be used to track all visitors and identify anyone who may be a registered sex offender.

WBHS administration will likely start doing “hall sweeps” in January. Schlass says that a group of teachers are working with East assistant principal Zach Daniels to plan these sweeps, in which staff start walking from one end of the building to the other and check that every student in the halls have a pass.

“I don’t want to do them all the time, of course,” Schlass said. “I think we’ll announce a few, but we may get to a point where my recommendation would be, ‘Let’s do them unannounced, so our students and our teachers don’t know when it will be.’ Just because I think there’s some value to doing them without making it known to everyone.” 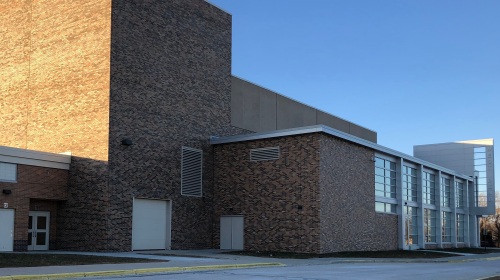 Many students and staff are concerned by the number of exterior doors at WBHS, as they are easily propped open and used to sneak out. Photo taken Wednesday by Samantha Dietel, Editor in Chief.

As the number of exterior doors have long been a concern at WBHS, an alarm system is under consideration for the future. Students have been known to sneak out side doors or prop them open for various reasons, so district officials hope to curb this by having an alarm sound.

Many of these new plans have been shared with parents and local community through digital communication, as well as at the Dec. 9 school board meeting. The changes were also presented to WBHS staff Dec. 10.

In order to afford some these security changes, the district will use some contingency money that had been reserved in case of unexpected expenses, Schlass says.

“We’ll apply for any federal grants and any local grants if the state were to offer any incentives to do this,” Schlass said. “There is also that kind of money that we can seek, and we will.”

At the board meeting, Kirkegaard promised that the budget will not be overspent.

“We’ll find the necessary resources because this truly is the highest priority,” Kirkegaard said.

Additional safety measures were already put into action shortly after the Dec. 3 shooting at Oshkosh West High School. A staff meeting was held after school the following day to share immediate changes with teachers. They were told that classroom doors are required to be locked while classes are in session. All internal and external doors are not to be propped open. Former students are also no longer allowed to visit during the school day unless they have been invited on official business.

“We’ll find the necessary resources because this truly is the highest priority.”
– Superintendent Don Kirkegaard

Schlass explained that the previous policy allowed former students to visit after school, but was loosely implemented so that many would still come while classes were in session.

When asked about his thoughts on the immediate policy adjustments, West senior Noah Doedens said he supports the idea that doors should be locked during class time. He referenced how West social studies teacher Mark Drake has always kept his door locked, even before the new procedure was implemented. Doedens thinks that this has not only made Drake’s classroom safer, but it has allowed students to focus better and concentrate more on learning.

However, Doedens thinks that restricting the visitation of former students is unnecessary.

“Most of them are college students coming back to visit teachers who they made strong connections with in their times at high school,” Doedens said. “I still think they should have to check in at the greeter’s desk, but to prevent them from coming altogether I think is excessive. Teachers have such large impacts on the lives of their students, and I think the idea of students being allowed to visit and reconnect with their previous teachers is something that should be embraced, not rejected.”

When it comes to the visitation policy, East French teacher Christi Fischer is saddened that former students will no longer be able to visit during the day, but she understands the change.

“They don’t want people who don’t have a reason to be in this building for learning to be here because in other cities, there have been some shootings that have happened by former students that have come back with a grudge,” she said.

Schlass says that the administration plans to soon bring students into the auditorium to talk about the new safety changes around the building, particularly the new entrance procedures. He also explained that there is discussion of trying to get some student involvement in future safety plans, perhaps in the form of a committee.

“Student voices are really important,” he said. “We’re interested in getting the input of some students. It shouldn’t just be adults, in our opinion, because this is a school that has nearly 2,200 students in it, so they should have a voice at the table, too.”

Students eat lunch in the West Bend East High School cafeteria Tuesday. Some students worry that the campus cafeterias are vulnerable areas because there are so many windows that students may be unable to hide from an intruder. Photo by Samantha Dietel, Editor in Chief.

While some WBHS students like Doedens are not worried about any particular areas of the building, many are still concerned about the safety of the cafeterias.

“Fights (sometimes) tend to happen there, and there is really no way to get out in a hurry if something were to happen,” West sophomore Kayla Lemens said.

West junior Abigail Wichlacz suggested that safety plans be practiced more often so that students know what they would do in the cafeterias.

“I feel like just discussing it, planning it out more with the students in every single class and even going over what we’d do in the cafeteria with our resource or something like that, I feel like that would be a lot better,” Wichlacz said.

In addition to frequently discussing school safety, West senior Aananya Saini thinks that WBHS should introduce classes focused on mental health to help prevent students from turning to violence. However, Saini is conflicted because taking many safety precautions means normalizing the possible situation of an armed shooter.

“I don’t want this to be normalized,” Saini said. “At the same time, I also feel like we should talk about it and put procedures in place, but that makes it normal. But in actuality, that’s not normal. A school is supposed to be a place where you feel safe, you’re supposed to feel valued, you’re supposed to get your education. But the fact that there’s school shooters coming in and hurting students and teachers, that’s not normal. That should not be normalized, and that’s a problem that should be taken care of.”