Sitting in Eric Beltmann’s stifling hot English class in May could prompt a student to set their gaze upon the artwork on the room walls, rather than the grammar being taught at the front.

If students look to their left, their eyes may be drawn to a print of the eyes of Dr. T. J. Eckleburg from The Great Gatsby, which students read fourth quarter in Beltmann’s 10th grade honors English class. 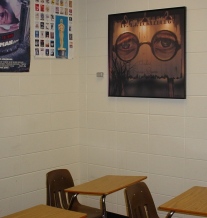 The framed print was installed in April.

The print was given to Beltmann as a gift this year from former student Madison Skramstad.

Skramstad, who graduated in 2008 and was Madison Stewart before getting married, designed the piece and then had it framed.  The piece is three feet by three feet and hangs in the back of Beltmann’s classroom.

Skramstad said that Beltmann always wanted her to do a mural for his room back when she was in high school. Specifically, Beltmann wanted the piece to be of The Great Gatsby and the eyes of Eckleburg, which is “imagery he really liked,” Skramstad said. The eyes, which appear on a billboard, serve as one of the most famous symbols in American literature.

After moving to a new home and rediscovering her copy of the novel, Skramstad was reminded of her promise to Beltmann for the piece.  She emailed him last fall to discuss making good on it.

“Madison contacted me out of the blue, and offered to do a painting free of charge,” said Beltmann. The two discussed what Beltmann had in mind for the piece and Skramstad created a mock up on the computer.

“I really overdid it, I kind of outdid myself, because the mock up I did is what you see in the frame,” she said.  Skramstad asked Beltmann if he would just like a print of the piece because, “I am a good painter but there is no way it will look as awesome.”

Some wild wag of an artist set them there…

The print also allows Beltmann to bring the piece with him if he ever moves rooms or retires, and he agreed to the plan.

“My jaw dropped when she showed me the design,” said Beltmann.  “She was a gifted artist in high school, so I knew she would create something amazing.  I couldn’t wait to show it off.”

Skramstad also drew some of the artwork in the foreign language hallway. 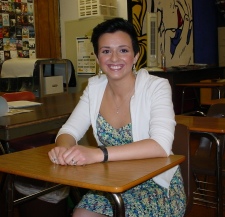 On May 29, artist Madison Skramstad visited Eric Beltmann and found her old desk for sophomore English.

“Mr. Beltmann was definitely my favorite teacher, but I would be lying if I said I wasn’t playing favorites a little bit,” she said when asked if she has ever given a similar gift before.  She also said that Beltmann’s teaching style “absolutely changed how I saw the world.”

If students were to look to their right, they might see a pop art mural on Beltmann’s classroom wall.  Three students, one of which was Caroline Bohler, painted this piece in 2005.

Bohler, who was Caroline Mueller before getting married, “really liked Beltmann” and wanted to brighten up “the sad, dark interior of his room.”

“I always loved Roy Lichtenstein,” Bohler said about her time in high school.  She traveled to France her senior year and saw some pop art pieces in modern art museums and painted a Lichtenstein in her parents’ garage when she returned home.

“Finally my senior year I was able to convince Beltmann to allow me to paint a similar piece in his room,” Bohler said.  Her painting is an imitation of Lichtenstein’s “Kiss V” from 1964.

Today both Skramstad and Bohler find art incorporated in their everyday lives.  Skramstad recently designed a logo for a friend’s hiking group and frequently paints murals for people’s homes.  “Basically odd-jobs that incorporate art,” Skramstad said when asked about the role art plays in her life.

Bohler has a degree in journalism/advertising and works in Madison in the web department of an advertising company.  She has also recently realized another passion of hers in floral design and has started a small business in the wedding industry.

“I miss both Maddie and Caroline, and I love having these reminders of them.  Plus, now I really do have eyes in the back of the room,” Beltmann said.

4 responses to “Blue and Gigantic”