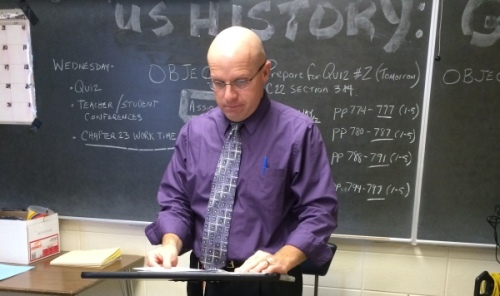 Five faculty members offer opinions about whether the high schools should become one school:

Michael Kieser, East Social Studies
I clearly support the status quo—two schools, one East, one West. First reason would be participation. Especially at the varsity level. I know they have talk that if we go to one school they would create two freshman teams and maybe a varsity reserve, but overall everything that I’ve looked at says that overall participation would go down a bit plus varsity opportunities would be cut in half. So that’s the primary reason because I think it’s better for kids to have those opportunities.

The other problem is that the resulting school, which would have about 2,300 kids, there’s only six or seven schools in the state of Wisconsin that have over 2,000 students. There’s a heck of a lot more that have between 1,000 and 1,500 and there’s a reason for that. Most people recognize that one big school like that really isn’t in the best interest of kids. So I don’t want this big “megaschool” because I think it hurts the identification of the individual student.

The other problem is that it’s been researched enough that they’ve kind of rolled out the arguments that were used 20 years ago. The community has changed a lot in 20 years and so the fact that they seem to want to do this without there being a referendum of the people, I think is dangerous. You know we do things by voting here, not seven people on the school board, but the community. When they formed the school back in the late ‘60s, it was done with a referendum. When they had a question about this in 1992, they went to a referendum. So it’s 2014, we should have a referendum. Let the people decide. Not some survey, not the members of the school board.

Bill Albrecht, West English
I’ve actually wanted it to be one school ever since 1979 because in ‘79 I was an eighth grader in West Bend and my friend and I grew up a block apart and he had to go to East and I had to go to West. Why? That’s just the rule they had. We wanted to go to the same school and we couldn’t—because of the rules. So I’ve always wanted it to be one.

I also think it would be much better that all our students, teachers, administrators, and our community’s money would be going towards one school. So when we go out fundraising and things like that, businesses don’t have to pick and choose to give to East or West, whoever they like better. They’d give it all to West Bend High School. I think that would be awesome for our community.

My last point is that a lot of what we do at the high school as teachers and administrators is based on best practice. Meaning what works best for other school districts. And obviously no other school districts around try this out and say, “Oh yeah, that’s a great idea.” In fact when I go out and talk to other teachers or coaches, they just laugh about the deal that we have here and then I can’t explain it. I’ve always been a big fan of one and that’s why I’m hoping that’s where this goes.

Beth Kastner, East World Language
I don’t think there’s really an easy answer, two schools or one school, but if I had to answer I think I would stay with two schools because we can’t change a mistake that was made over 40 years ago when they should’ve made the right decision to begin with. But because we were too cheap and frugal to make the right decisi

on, we have been suffering for it. There’s no way that the kids’ schedules nowadays would allow us to travel two or three hours to a competing school whose conference we would have to belong in because we’d be one of the biggest schools in the state. We also just put tons and tons of hours into researching the two-school option, which I believe was five years ago or less. I don’t understand why we’re wasting time going over it again in less than a decade. I think it’s somebody’s personal agenda that they’re trying to push through and perhaps get on their résumé so that they can leave West Bend and then we have to deal with the problem afterwards.

Patricia McIntyre, West English
My feeling about combining East and West high schools is completely dependent on what it means for the students and the education that they’re going to receive here. When I started here 15 years ago, there was East and there was West and it was very clearly separated. And because of that, East students staying in East and West students staying in West, the teachers had an opportunity to get to know the kids that were in their school. Now I would have twice as many kids

to get to know. We know for a fact that students do better academically when they feel like they are connected to the school and that they have relationships with their teachers. Having 2,300 students to get to know and establish that kind of a relationship with is nearly impossible. So doubling the number of students’ faces that I have to try to get to know is going to prevent me from having the kind of relationships that I think are productive for them academically. That’s why I think it should stay two schools. And I know there are a lot of concerns with athletics and there are some concerns about finances; to me the only thing that matters is the experience that the kids have and feeling like they belong and are safe in a school where they are known by their teachers.

Adam Inkmann, West Social Studies
If I’m asked about one school, two schools, I’m not from here, so I tend to lean a little bit more towards one school. I always thought that it was confusing. And my hope would be that if we were one school, the community would rally behind that one school more so than they do the current two schools.