Former Sun Will Be a Badger 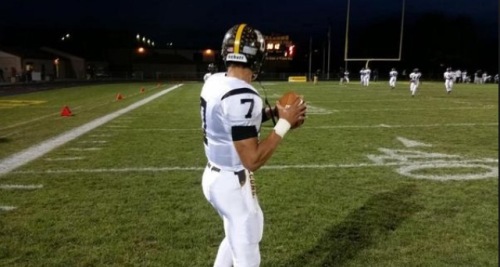 Next year, football fans in West Bend will have a reason to cheer a little bit louder for the Wisconsin Badgers.

Former East High student athlete Zack Baun will play football for the Badgers next fall.  Baun will officially sign his national letter of intent on February 4.

“I gave my verbal commitment on October 25.  I was super nervous but it was an awesome moment and they really welcomed me with open arms,” Baun said.

Baun, currently a three-sport athlete at Brown Deer High School, excelled in his sports, especially football.  As a quarterback he led the Falcons to an 8-3 record and received the prestigious award of WFCA Offensive Player of the Year this past season.

Baun got his start at a young age, bouncing from different elementary schools and attending Silverbrook for three years.  “I started playing soccer in third grade and that was my first organized sport.  Then I started playing basketball for the Boys & Girls Club in fourth grade and started football in sixth grade,” Baun said.

Baun then attended West Bend East where he played football and basketball.  It wasn’t always smooth sailing for Baun at the beginning of high school.

“To sum it all up, I wasn’t very motivated to do anything.  From schoolwork to sports, I was always just kind of going through the motions just enough to pass my classes or just to get by.  I wasn’t really the one to go above and beyond in anything I did.  I just accepted myself to be an average person,” Baun said.

That changed, however, when Baun moved to Brown Deer to live with his mom, brother, and sister.  Upon arriving and participating in basketball, football, and track and field, Baun has overcome any doubts about his future.

Baun has become tremendously successful in his sports and the Wisconsin Badger football team took notice.  The Badgers became very interested in Baun and offered him a spot on the football team.

“I went on a few other visits and no others were nearly as good as Wisconsin.  Everything from the academics, coaching staff, facilities, to the atmosphere was just amazing.  I just feel like that is where I will fit in the best and succeed both academically and athletically,” Baun said.

Baun will major in kinesiology.

Schools all across the Midwest recognized Baun’s talent and were interested in having him play for them, including other Big Ten schools such as Minnesota and Indiana, and a Big 12 school in Iowa State.

UPDATE: On Sunday, Jan. 18, Zack Baun tweeted, “Just had my grey shirt offer switched to a full ride to UW-Madison.”