It only took 22 years for the East community to celebrate another individual state champion in wrestling.

Jordan Gundrum, a senior 160-pounder, defeated Ben Hakes of Oak Creek with a major decision at the Kohl Center in Madison on Feb. 28.

Right when the match was ending, it didn’t really hit me, I was still in the wrestling zone. But after the match it began to hit me,” Gundrum said.

Gundrum had a large fan base along with many family members. “I was getting pretty emotional and everybody was supporting me and crying when I got up to the main floor, along with hugs and pictures, it was crazy,” he said.

Gundrum’s father was a state champion also, but at Ozaukee High School. “My dad and my brother are pretty supportive. My dad is always helping me out. I can do this or I can change that, this will help you more, stuff like that,” Gundrum said.

His mother gives her own advice when she can. “My mom doesn’t say a lot other than ‘you should eat more’,” Gundrum said.

Not only did the match have significance because it was the state finals but because it was an opportunity for Gundrum to break his own record for most seasonal wins for a third consecutive season and to cap off a perfect 50-0 record.

“The fact that I could be 50-0 which would break the school record again for the fourth time was running through my head,” Gundrum said. 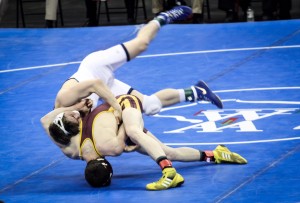 Since wrestling is an individual sport, a great load of pressure is put on that competitor. The wrestler must have the right frame of mind and confidence to finish the deal, according to East’s head coach Andrew Mueller. “I think Jordan’s mindset was very focused on wrestling a smart, well-positioned match. He was nervous, but confident and ready,” Mueller said.

“Well, I knew he definitely had the easier side of the bracket, and I got through my half pretty easy, so I knew I could probably do pretty well,” Gundrum said.

This wasn’t the first time the two have squared off. “I have wrestled him and I beat him in Freestyle and Greco,” Gundrum said.

Freestyle and Greco are different forms of wrestling and not the traditional form Folkstyle, which is used at the state tournament. “I didn’t have a game plan from wrestling him before but from watching his other matches. He won a bunch of his by a point and got a cheap throw at the end. I knew he was going to go for big throws and he did. I figured if I had good defense on those throws, I would be able to catch him,” Gundrum said.

After the emotional roller coaster of winning at state, Gundrum had to find some way to come down to earth. “Once we got back to the hotel it was super chill and I was happy just sitting there eating,” Gundrum said. “I gained like 15 pounds; I need to stop eating so much,” he joked.

Gundrum is uncertain about his future. “I’m waiting to see if colleges are going to say they will give me a lot of money and I can wrestle for them. If they don’t in the next couple weeks, I might just go to tech school and not even wrestle,” Gundrum said.

He clearly has established himself as an elite wrestler and would benefit any collegiate wrestling team. “I hope Jordan continues to wrestle in college. I think with his abilities and work ethic and with the right program he could be an All-American or even a national champion,” Mueller said.

Gundrum has definitely excited the East wrestling community. “My hope for the team is to rally around this excitement and push each other to higher levels in order to take our program to the next level,” Mueller said.