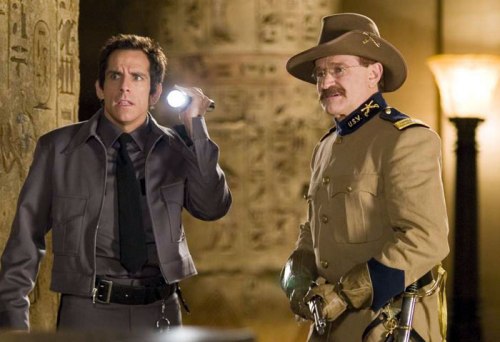 I’m pretty sure that almost everyone knows the name Robin Williams.

Following his sudden death on Aug. 11, 2014, the world was in shock. He was, and still is, a huge movie icon, someone who will be remembered for years to come.

One of the last movies the beloved Williams was in before he passed was the third and final installment of the Night at the Museum series.  In Night at the Museum: Secret of the Tomb, released on home video on March 10, Williams plays the adventurous and enthusiastic Teddy Roosevelt, and there was no better actor who could have put as much life into a wax figure as Williams did. Since Williams was so much like his character in real life, I’m sure all he had to do was memorize the lines and the rest just came naturally. He was the character. Not only in the movie but in everyday life.

At the end of the movie–don’t worry, I’m not giving it away if you haven’t seen it yet–Williams holds his head high for what he knows is coming, a fate that he and the others have chosen. And yet, he is still the reliable and comforting friend to Larry Daley, played by Ben Stiller. Let’s just say that I was in tears and that one of Williams’ last films had the most perfect and bittersweet message for all of his mourning fans in the world.

Tagged as Amber Olson, Movie Musings, Night at the Museum: Secret of the Tomb, Robin Williams