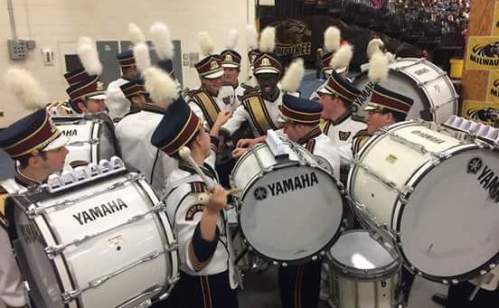 Besides bragging rights, another perk to placing in the competition was the prize money. The drumline received $500 for their second place finish. This money is used to directly benefit the drumline through the purchase of new equipment.

“We got drum heads, and we’re planning on getting some nice drum sticks so everyone matches,” said Ben Kroll, East senior and member of the drumline. “It’s just used for wear and tear stuff.”

Leah Duckert, one of the WBHS band directors, views the drumline’s accomplishment with admiration.

“I continue to be immensely proud of them, not only for their integrity, but also for the awesome they always display to the other drumlines they meet,” Duckert said. “They really invest in our band’s motto, ‘Excellence with Pride.’”

Drumline displayed this excellence at the competition with a fresh set of music.

“It was different,” Kroll said. “A lot of the other drumlines, they would go in there and they’d play really basic drum parts. But we would go in there and we’d play different parts of music, like we incorporated two different Pitbull songs; there was ‘Fireball’ in there, and ‘Give Me Everything Tonight.’ We had ‘Turn Down for What’ by Lil Jon. It was just different modern songs to make it more enjoyable.”

Duwayne Davis, another East senior and member of the drumline, agrees.

“I thought it was really fun,” Davis said.

This statement represents the general atmosphere of drumline, where an abundance of team bonding takes place. Through all of their time spent practicing and working together, the drumline has become a tight-knit group.

“You get here and it’s a very family feel,” Kroll said. “Sometimes you get mad at everyone because they don’t practice, or sometimes you feel really good because somebody accomplishes something really good. Like Duwayne doing all this drum core stuff and he’s on the Bucks and Packers drumline.”

“You get here and it’s a very family feel.”
– Ben Kroll, drumline member

“You usually don’t see them during class,” Davis said. “But you’re able to build a relationship with these people who you normally wouldn’t encounter.”

Bonding experiences happen outside of the band room as well.

“Over the summer we went to the Dells and spent the whole day at Mt. Olympus,” Kroll said.

However, drumline is not all fun and games. It requires serious hard work and dedication. Starting in January of 2016, drumline began practicing every Wednesday from 6-8 p.m., usually running overtime by 45 minutes. The week before the competition they kicked it up to high gear, with a Saturday practice from 1-5 p.m., a Wednesday one from 1-4 p.m. and a practice the morning of the competition from 9:30 a.m. to 1:30 p.m.

“Our drumline works tirelessly, not only in their daily band rehearsals, but also in their sectionals and private practices. As a section, their work ethic is outstanding,” Duckert said.

In addition to the competition, drumline showcases their pride through participation in events within the community. Besides playing school pep rallies, they have ventured out into the community and played several 5Ks in town. They have even acquired a degree of local fame.

“This year we didn’t go, but in the past we’ve gone down to Bob and Brian on 102.9 and we’ve played on their radio station,” Kroll said.

The drumline performs at the Fresh Coast Drumline Competition at UWM on Nov. 26. Photograph courtesy of Caitlin Marsch.