By Jessica Steger, Editor in Chief

The weather has been quite ambitious this winter, what with the cold snaps and heat flashes, not to mention the indoor rain.

West Bend West High School English teacher Tiffany Gitter encountered a surprise Jan. 22 when she walked into her classroom and found a pool of water, due to a leak in the middle of the ceiling. She experienced a similar leak during her first year of teaching, but the leak had remained dormant since 2014.

“On Monday, when the students weren’t here, I came in to my room and there was an inch of water,” Gitter said, indicating a large circle in the center of the room where the water was.

Due to the water, Gitter had to push the desks to the sides of the room. As Gitter continued to work, a new development occurred.

“Those tiles in the back were still intact, but they plummeted to the ground,” Gitter said. “So those tiles came down and there is a substantial leak in the back of the room now.”

Fortunately, students were not in the room when the ceiling tiles came crashing down. Since then, learning has carried on despite the inconvenience.

“Some days we have to sit in different spots because it will be dripping all over.”
– Mara Perkins, West sophomore

“Some days we have to sit in different spots because it will be dripping all over,” West sophomore Mara Perkins said. “It’s not that distracting, but it’s annoying.”

Gitter hopes the leak won’t interfere too much with student learning.

“I do know the first year when I had the bucket and it was dripping students were like, ‘Mrs. Gitter, if I don’t do well on the quiz it’s because of the dripping,’” Gitter said.

At the moment the leak is being managed with buckets and towels. According to Tom Frigge, the WBHS facility coordinator, the roof over the classroom will be replaced this upcoming summer. 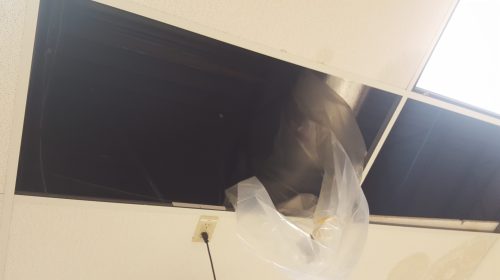