The No Nonsense Brass Band thinks its new song will wow the crowd Wednesday at the third annual Rock & Jazz Fest.

“We play mostly New Orleans style blues, with some pop and rock roots,” Theisen said. “One song in particular that we have been working on is called ‘Temple of Boom,’ recorded by a brass band from New York who we had the opportunity to meet two years ago at Summerfest. This song has a much heavier beat that is sure to keep the crowd rocking from start to finish.”

The Rock & Jazz Fest is 7 p.m. Wednesday in the Silver Lining Arts Center. Admission is free. The West Bend bands also invite all to stop by the Souper Stars fundraiser from 4:30 to 6:30 p.m. to support the band program and get a delicious meal.

No Nonsense has been practicing hard to improve their skills on “Temple of Boom” and their other pieces for the upcoming concert.

“We have never played such a heavy and intense song, so it took lots of practice and experimentation in this new style,” said Hikade, a West senior and drum major. “The Rock and Jazz Fest is one of my favorite performances every year, as there are so many different groups with different styles. Each group demonstrates tremendous talent with the songs on which they have worked very hard. They are high energy groups with many dedicated members who want to show off their abilities.”

The Rock & Jazz Fest is very different than the typical band concert. This annual event is a special concert that highlights the talents and skills of extracurricular band groups from the schools in the West Bend School District. Each participating group shares their talent and hard work with the community through two to three lively performances.

This year the performing groups include the Silverbrook Viking Attack Pep Band, the Badger Jazz Ensemble, the West Bend Brass Band (WB3), PULSE (a WBHS jazz ensemble) and the No Nonsense Brass Band. 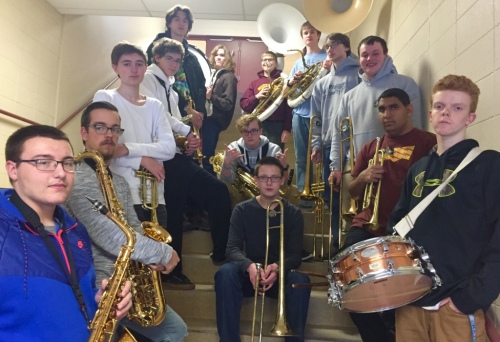 The West Band Brass Band will perform Wednesday at the Rock & Jazz Fest. Photo courtesy of the band.

No Nonsense’s performance at the Rock & Jazz Fest will only be its second time playing in public together with all of its current members.

Speaking about the kind of experience participating in No Nonsense has given him, Hikade said, “This different setup requires playing differently than any other ensemble, so I hope I speak for everyone when I say that this group has allowed me to learn how to play in such a different way and expand my horizons in the field of music.”

Theisen, an East senior, also said that the goal of No Nonsense was to grow in different directions as musicians.

“When we started this band, we decided to take our musical abilities outside of the usual school curriculum and start our own band with our own beat outside of school, and away from the normal pressures,” Theisen said. “One important aspect of this is making sure we practice hard and often because unlike the extracurricular groups, we play our music by ear, with no sheet music. This makes it even more vital that we listen to each other and feed off of each other’s sound.”

While not every extracurricular band group requires playing by ear, the experience of being in an extra band is known to be rewarding regardless of which group it is.

“I participate in extra band groups because it is always a chance for something new and you get to meet some pretty cool people,” said Caeley Champeau, a West ninth grader in the jazz ensemble PULSE. “I feel excited for the upcoming concert. They are always a ton of fun.”

“We have never played such a heavy song, so it took lots of experimentation in this new style.”
– Spencer Hikade, the No Nonsense Brass Band

The high schoolers participating in the extracurricular bands encourage young, aspiring musicians to also involve themselves in these groups.

“Anything is possible,” Hikade said. “If you have a certain style of music or instrumentation you truly enjoy, then you should absolutely pursue it. The band directors will definitely help with anything you might need to get started.”

Theisen stressed that it’s important for musicians to express themselves in their own ways.

“Do not be afraid to go off the beaten path and experience new opportunities outside of your comfort zone,” he said.

Corey Murphy, a band director at WBHS and Badger Middle School, is the director and organizer of the Rock & Jazz Fest. Murphy has also composed a song for the West Bend Brass Band, which will be performed at the concert.

Anyone and everyone is invited to the Souper Stars fundraiser for all-you-can-eat-soup as well as a beverage of your choice for $5. All of the proceeds are put toward improving the West Bend bands, especially the high school program. The fundraiser was organized by a board of devoted band parents, who put in “lots of work behind the scenes,” according to Murphy.

The fundraiser is open even to those not planning to attend the concert. There will be a bit of musical entertainment as well, as a taste of what the Rock & Jazz Fest has in store later that night.

“The Rock and Jazz Fest is an important part of the year because it allows a multitude of musicians of all different ages to have the experience of performing on a big stage in front of people that want to hear some good music,” Theisen said.

(Video: Members of the student-run band No Nonsense Brass Band rehearse for the 2018 Rock n’ Jazz Fest. Video courtesy of No Nonsense.)