The upcoming play “Junie B. Jones is Not a Crook” is a novelty for the West Bend High Schools.

For the first time in 11 years, the WBHS Drama Club is putting on a play specifically geared toward children. Also new this year, the play will be performed during the school day to allow nearby elementary schools to bring their students.

Director Tonya Fordham decided on a play with a younger audience because of the many requests over the years.

“We all feel very connected to the story and character of Junie B.”
– Lily Mottet, West junior

Although the play is directed toward children, the script promises to be entertaining and engaging for adults as well, including subtle hints and layers of a higher level of thinking. For example, in the play, Junie B. makes a reference to Picasso that adults may find amusing.

“‘Junie B. Jones’ is targeted at kids entirely, which is different because the high school has never done a show that is entirely directed at kids,” said West junior Cydney Bunk, who plays the lead role of Junie B. “Even shows like ‘Alice in Wonderland’ and ‘Charlie and the Chocolate Factory,’ although they both had children in mind, the script still kept a maturity to the show with the way the characters were described and the voice used for each of them. This script is written in the same voice as Barbara Park wrote the books and with the same energy that makes every character in the show a joy to watch and honestly a blast to portray.”

“It is definitely a very different experience from last year’s show,” said Lily Mottet, a West junior playing the role of Mother. “Last year was a very complicated, dialogue-heavy script and this one is a very light-hearted and silly show. A large majority of the children who are coming have read the books or have had the parents read the books to them. Most of the cast has, too, so we all feel very connected to the story and character of Junie B.”

(Top image: The cast of “Junie B. Jones is Not a Crook” during rehearsal. Photo by McKenna Garvey, East junior and the production’s student director.) 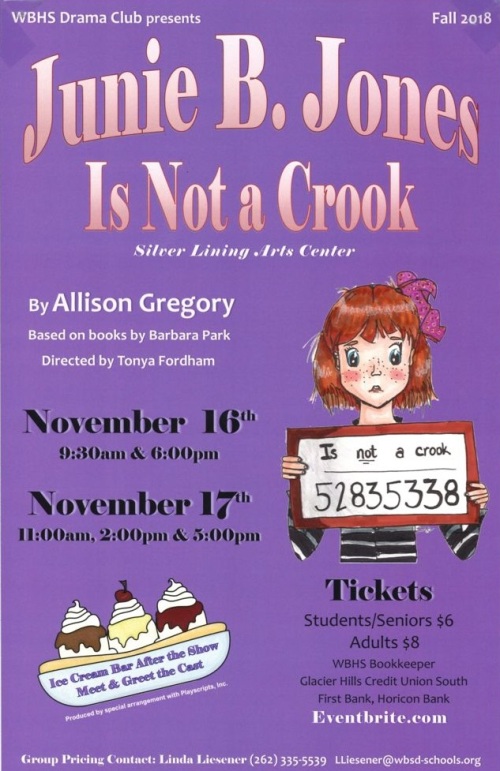