All students will eventually have a Chromebook

Nearby high schools such as Germantown and Kewaskum have moved to minimal tolerance device and cell phone bans in recent years. However, Tim Harder, the director of technology at the West Bend School District, along with the high school administration, have decided that the current policy based on teacher’s discretion is best for the district moving forward.

The current official policy at WBHS is an acceptable use policy. This means that students are allowed to bring any personal devices to school, but their teacher decides when it is acceptable to use them during class time. Usage in other areas of the building, such as hallways, cafeterias and libraries, are at the discretion of high school administration.

“Students can have their phones out if a teacher feels it is appropriate to use devices for a learning activity,” Harder said.

Other districts have made the decision to have a strict ban largely as a result of cell phones serving as a significant distraction during class time, in addition to causing numerous disciplinary issues.

Germantown first developed its strict cell phone policy back in 2006, and has made few changes to it since. Their policy states that students are required to keep personal devices in their lockers during the school day unless a unique circumstance is granted to them by the school administration. This ban is also enforced under a city ordinance, so students who repeatedly disobey the policy can be fined anywhere from $124 to $218.

“Our staff overwhelmingly supports the policy as written,” said Marc Lehnerer, the associate principal at Germantown High School. “Most of our younger students hate our cell phone policy. I believe, however, that many of our upperclassmen understand the reason for it.”

The major reasoning behind why the West Bend administration has decided not to further limit device use is because of the numerous educational applications they can have. Officials also say it is important for students to have accessible contact with parents or family in case there is a need for urgent communication.

“The problem is when you change the policy at a district level, you take it out of the teacher discretion of what is and is not acceptable,” Harder said. 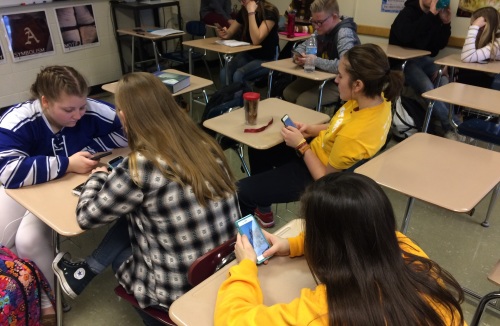 Kewaskum High School has also adopted a strict cell phone and personal device ban for the current school year. Similar to Germantown, students are expected to keep their devices in their lockers throughout the school day.

The ban was brought to the village board this past summer to become an ordinance, but this request was rejected. As a result, students cannot be fined for disobeying the policy, but they can have their phone confiscated and receive detentions or a suspension.

“The change came about because we are now one-to-one with Chromebooks, and we were looking to improve our learning environment,” said Scott Stier, principal of Kewaskum High School.

The Kewaskum administration says the staff and students have adapted well to the policy. They claim that because every student now has access to a Chromebook, there is no need to have devices as an extra distraction.

This, however, is not expected to change the current device policy.

“As much as Chromebooks can do, there are still other things personal devices are better suited to handle,” Harder said.

Harder listed a few examples of uses specific to personal devices such as using apps that are helpful in digital media classes or taking pictures of the board and other notes.

Even so, teachers may adopt stricter individual classroom policies once Chromebooks are commonplace.

“With students having access to Chromebooks, there should be less of a dependence on the need to have cell phones out,” Harder said.

Many teachers already have classroom policies and incentives to prevent students from having phones out during class. For instance, East social studies teachers Scott Mindel and Scott Lone have cloth pockets in the front of the room that students can put their cell phones in at the beginning of class to help them avoid the temptation of checking it. Students who choose to participate in this are rewarded at the end of class with Compass cash, which are cards students can submit to win raffle prizes.

Although there are no planned changes for the West Bend device policy, it is always possible there could be a change in the future. If a district device policy were to change, the director of technology would bring a revised policy to the school board, and the school board would vote on whether or not to implement it.

(Top image: A sign in Kate Colwell’s English classroom. Teachers at WBHS have discretion about when to allow devices in their classrooms.) 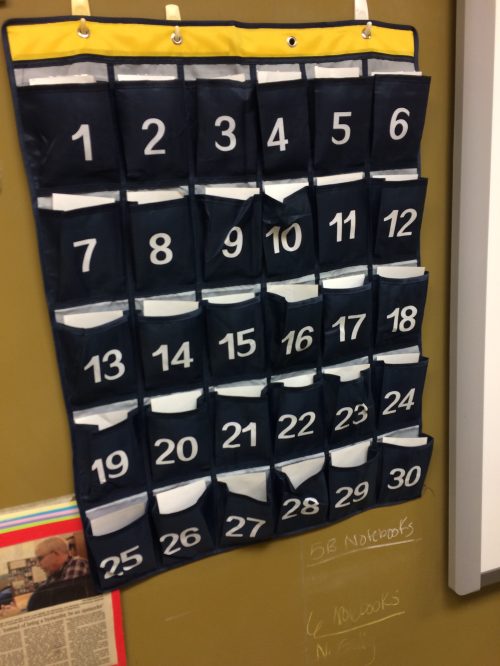