‘Did You Hear Anything?’: Shutdown Keeps Area Family in Limbo

The ongoing U.S. government shutdown has led a woman with local ties to worry about her husband’s travel visa application.

Amber Cypcar, a 2011 graduate of West Bend West High School, moved to Ecuador three years ago, but returned to the United States Dec. 12 to visit her family for the holidays. Cypcar’s husband Luis Bailon, a native to Ecuador, was unable to join her, even though he had begun the application process for an American travel visa in June. Due to the current government shutdown, neither Bailon or Cypcar know what is happening with the application.

“We don’t even know where his visa’s at still,” Cypcar said. “I still came home because I wanted to see my family and be here for the holidays, but he’s still down there in Ecuador and I’m pretty much just waiting for him to get here.”

Bailon, who is also a salsa dance instructor, had hoped to attend one of New York’s many salsa programs. He planned to first meet Cypcar’s family in Wisconsin, then study and dance in New York for about a year.

“We sent in our papers and the money, they have our money processed, that was fast, but we haven’t heard anything, really,” Cypcar said. “You can look online, but now with the government shutdown, everything online is stopped.”

West graduate Amber Cypcar and her husband Luis Bailon exchange rings on the beach in Puerto Lopez after their wedding in November 2017. Though it is not a typical practice in an Ecuadorian civil union wedding, it was important to Cypcar that they exchanged rings. Photo courtesy of Cypcar.

The current government shutdown, which is now the longest in U.S. history, began Dec. 22 after Congress did not agree to put $5.7 billion of the government’s 2019 fiscal year funds toward President Trump’s proposed wall along the U.S.-Mexico border. Without funding legislation in place, some departments of the U.S. government have been partially shut down.

Cypcar thinks the government has not been clear about whether it is still processing travel visa applications through the shutdown.

“It’s this waiting game and not knowing that I think is the most frustrating part,” Cypcar said. “You just are literally like a sitting duck, waiting, and I think that’s the worst part. My husband texts me every day, ‘Did you hear anything? Did you hear anything?’ I’m like, ‘No, I haven’t, and the government is shut down, so I probably won’t.’”

“It’s hard not to know anything about what is happening,” he said. “The anxiety gets a little bigger every day when I think that a simple ‘yes’ or ‘no’ could change my life completely.”

This is not the first time that Bailon has applied for a U.S. travel visa. According to Cypcar, her husband has previously been denied a visa three times. Each time, Bailon was asked approximately two or three questions during the interview stage before his application was rejected.

Bailon said that before his first interview, he had been excited and certain that he would be granted a visa. He says that after his application was denied, he felt confused and did not know what to think.

“When I realized that I could not travel or see my (American) friends and dance in New York, I felt angry because someone could tell me that I wasn’t able to dream,” Bailon said. “Then it was a feeling of sadness, I think I wanted to cry from the frustration of not being able to do anything. I felt helpless.”

Bailon recalls that after leaving the consulate where the interview took place, he looked around and realized that he was not alone.

“There were many sad people like me, even families that maybe had waited years to meet their loved ones, but they could not since they were not allowed to,” Bailon said. “At that moment my sadness grew larger. I felt sad for those people who had waited years to get together with someone they loved. I also decided that nobody has the right to refuse us to dream, so I returned to my town and continue to dream.” 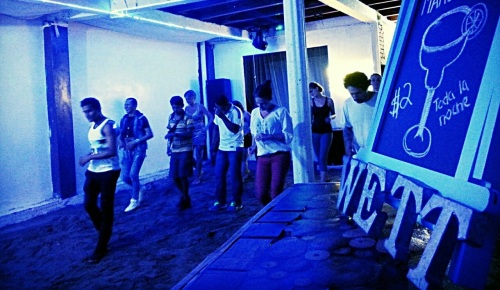 Luis Bailon teaches a free salsa class every Thursday in the discoteca. Bailon hopes to study salsa in New York, but has not yet decided which program to pursue. Photo courtesy of Amber Cypcar.

Because he is currently unable to enter the United States, Bailon continues to run Wett, the Puerto Lopez bar that he opened with Cypcar in February 2017. Cypcar says that she must return to Ecuador by April, since they are expanding the bar before the tourist season begins in June.

When asked about his passion for salsa, Bailon said that he believes he was born to dance and that it is his way of life.

“I remember being super young, dancing in the sand without shoes,” Bailon said. “Every time I danced, I felt more alive than ever. That feeling of happiness runs through my veins and leaves with every drop of sweat and dancing for me is priceless. I’m passionate about its rhythm, its history, the sound of each instrument and also, how it makes the world connect. Thanks to salsa, I have met people from all over the world full of passion just like me. I feel that with salsa I have managed to know the world in my own way.”

Home for the Holidays

Lorraine Backus, Cypcar’s mother, is disappointed that Bailon was unable to make it to the United States in time for the holidays. Backus, who is the only member of Cypcar’s family to have met Bailon thus far, was looking forward to witnessing his experience of a snowy Wisconsin Christmas.

“We were excited to just show him this crazy Christmas that we have up north and with the evergreens and snow and Christmas lights everywhere, and ugly Christmas sweaters,” Backus said. “We made him the ugliest Christmas sweater, it lights up. And then to find out he couldn’t make it, we were sad that he’s going to miss out on that. We’re just frustrated because they applied so long ago and it’s still spinning its wheels. It’s frustrating that somebody who does it the right way and goes through all the right steps gets stuck in the mud.” 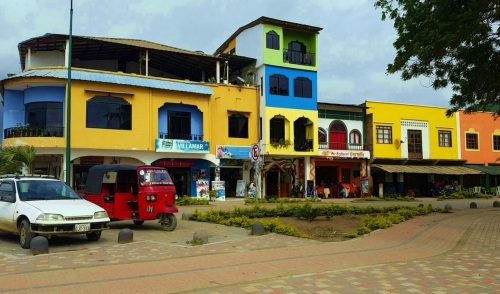 Bailon had also been excited to spend the holidays with Cypcar’s family, but he is hopeful that he will meet them soon.

“I felt very sad during the Christmas holidays as I thought about meeting them and being able to share those special moments with my new family,” Bailon said. “Now we just have to wait and thanks to the support of my wife, I feel that soon I will be with them. I will teach them all to dance salsa.”

Cypcar explained that during her time in Ecuador, she befriended a young Syrian woman that had issues with the process of applying for a U.S. travel visa. Cypcar’s friend, after being accepted to Columbia University, applied for a visa while in Ecuador.

“She had her letter, she had the support of a professor from there, so she goes to her interview, and they originally say yes,” Cypcar said. “We actually went out and celebrated that night. The next day, they called her and were like, ‘We changed our mind, we’re denying your visa’ and they put a big black ‘x’ in her passport, which now makes her look like an international criminal. With her denied visa and that big ‘x,’ she couldn’t apply in Ecuador anymore, so she had to go back to Syria.”

Cypcar says that her friend was unsure if any of her loved ones in Syria were still alive, but she had to go back and “continue to try.” This experience was before Cypcar had met her husband, so it opened her eyes to the difficulty of obtaining a U.S. travel visa.

“Why is it so difficult if somebody completes the requisites?,” Cypcar asked. “I had to complete requisites to get my Ecuadorian visa, but if somebody completes that, why are we still saying no? That’s kind of why I wanted to help in any way I could and try to get somebody who deserves to be here, here, where they want to be, and just fulfill a dream. Who are we to say that you can’t fulfill your dreams and you can’t go dance salsa in New York?”

Living the Life in Ecuador

Cypcar moved to Ecuador soon after earning her bachelor’s degree at the University of Wisconsin-Madison. She taught English to adults in Quito for a year before opening Wett in Puerto Lopez, where she has now been living for the past two years. Besides running her bar with Bailon, Cypcar also works as a real estate agent and office manager for Live the Life.

Cypcar and Bailon married in November 2017 after meeting the previous year at a whale watching festival in Puerto Lopez.

“(In Ecuador) there’s usually two weddings, there’s the courthouse civil union wedding and there’s the church wedding, which is way more intense,” Cypcar said. “But we didn’t want to have a church wedding when he hasn’t even met my family yet, so that step will come later.”

When making additional comparisons between the United States and Ecuador, Cypcar expressed that there is a difference when it comes to the quality of life.

“It’s really more group and family mentality (in Ecuador),” Cypcar said. “Here (in the U.S.), it’s pretty individual. We’re kind of always looking out for ourselves. We want our job, we want to do well, be successful, and then comes your family and relaxing, where there (in Ecuador) it’s completely opposite. They have their house, they have their bed and they’re happy with that.”

Cypcar also noted the importance of traveling and the global understanding that one can acquire through those experiences. Cypcar, who has visited a number of foreign countries, thinks that through international travel, people can gain a better perspective.

“I feel like we take things for granted and just seeing people struggle to get water really opens your eyes sometimes,” Cypcar said. “The world’s not a scary place, but it’s actually a lot smaller. We’re all the same, we’re all people. There’s all these lines and reasons to separate us, but we’re all a person, we’re all pink on the inside. I think we’re losing a little bit of our human touch and we’re all being categorized in class and things like that, and at the end of the day, we’re all just humans.”

(Top image: West graduate Amber Cypcar and her husband Luis Bailon in front of Wett, the bar they operate together in Puerto Lopez. Photo courtesy of Cypcar.)