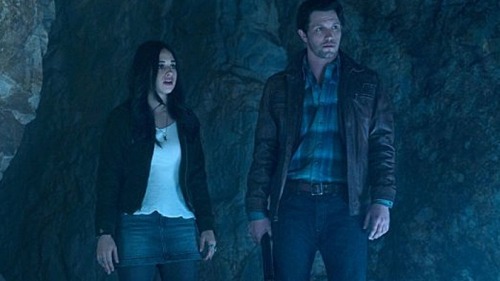 The CW’s “Roswell, New Mexico” is another attempt to keep the “The Vampire Diaries” magic going. Now that that’s out of the way, we can talk about the series’ political message.

“Roswell” is about three alien beings who crashed on earth during the 1947 Roswell incident and are now in hiding as “illegal immigrants.” The series is not subtle about what it is alluding to. There’s an Alex Jones wannabe who fear-mongers about violent rapist aliens, the Air Force are essentially ICE and the series rather lamely throws out a few jabs at Trump (without mentioning him by name). “Roswell” would have you believe it’s cutting to the bone of America’s border panic, but further scrutiny leaves everything to be desired.

The most blatant criticism of the show is its own cowardice. The Trump era has snapped every American political norm like a twig, yet the showrunners don’t even have the courage to make an actual show about illegal immigrants. Immigration and border security have never been more relevant to the current generation and “Roswell” knows that because it frequently references current affairs, so why use metaphor when you could talk directly about the issue? This is not the early 2000s where the tragedy of the September 11th attacks made political criticism of the president and wider government politically incorrect. Today, you don’t have to sneak your message in with allegory.

Besides, using extraterrestrials as a stand-in for humans has some problems of its own.

You see, the “illegal aliens” have superpowers. While they are mostly there so the alien characters can use them in melodramatic fights with each other, the very idea that these characters having what amounts to magic taints the metaphor. How can we sympathize with the aliens when in just the first episode they explode car windows and throw each other around with their electrical grid shorting powers? The reckless use of space magic paints the aliens as violent and short-tempered and, worst of all, completely removes them from being on the same level as a human. Someone crossing the border, illegal or not, can’t melt your brain and if your allegory can, then it fundamentally doesn’t work.

It’s frustrating to see “Roswell’s” limp take on an issue that is affecting us right now. As of this writing, 800,000 government employees are on furlough over illegal immigration and the series that’s explicitly dealing with “illegal immigrants” handles it with all the plastic, neoliberal tackiness of a Gillette commercial. A series about the lives of illegal immigrants is fertile ground for social commentary that is practically begging to be made.

The life of immigrants in border towns, fears of ICE deportation, why they came to the United States, interactions with the locals, military service citizenship, etc. There is so much here, yet “Roswell” isn’t interested in any of it.

To conclude, if you are going to use hot button political issues to sell your teen drama, the least you can do it have a better hot take than the cohorts of woke Twitter.

(Images are official publicity material from the CW.)