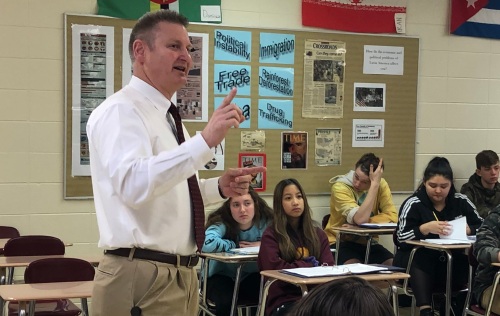 Honoring veterans is one of the things that Scott Mindel has chosen to spend much of his time doing. It was just a matter of time before he received the recognition he deserves.

Mindel, a West Bend East High School social studies teacher, was named teacher of the year for the state of Wisconsin by the Veterans of Foreign Wars on Saturday. He received the award in Green Bay due to the amount of time that he has spent recognizing local veterans throughout the years. Tonight, at the school board meeting, time has been set aside for John Kleinmaus of the VFW Post 1393 in West Bend to recognize Mindel for his work and award him with the District 6 level of the award.

Most WBHS students will remember the Veterans Day assembly that Mindel organized last November. While this is the primary reason that Mindel was nominated for teacher of the year, there are many other things that Mindel has accomplished that went into him receiving this award.

“The award is not just for that, it’s a combination of things starting in 2015, with the West Bend High School veterans tribute video that plays downstairs in the main hallway,” Mindel said when asked what the award is for. “It’s for what happened on November 1st, it’s for things that I have done for Memorial Day and the Fourth of July parade, it’s for the national Signing Day that we have for students that are going into the military. So, it’s a combination of things that have happened since 2015.”

In order to be eligible for the state level of this award, Mindel had to be nominated for and win the regional level of the award.

“I was nominated by John Kleinmaus, who is connected with the VFW post here in West Bend,” Mindel said.

Along with the nomination by Kleinmaus, letters of recommendation were written by Jessica Flitter, Jacob Gitter and Tyler Wood, all staff members at the West Bend High Schools.

“He works tirelessly to get our community veterans recognized,” Flitter said. “He doesn’t promote himself because he wants to keep the spotlight on the veterans.”

After winning the District 6 VFW teacher of the year award, Mindel became eligible for the state level award.

“I was informed by somebody representing the state VFW, that I received the award for the state and that now my nomination would go forward to compete with 49 other people for the national teacher of the year award,” Mindel said.

The winner of that award will be determined in March and awarded at the national VFW convention in July.

“I told Mr. Kleinmaus, it was an honor just to be nominated,” Mindel said. “I told Woodman, thad called me from the state level of the VFW, that it’s an honor and I am humbled to receive this award.”

In a closing remark, Mindel said,  “I do what I do on behalf of veterans.” 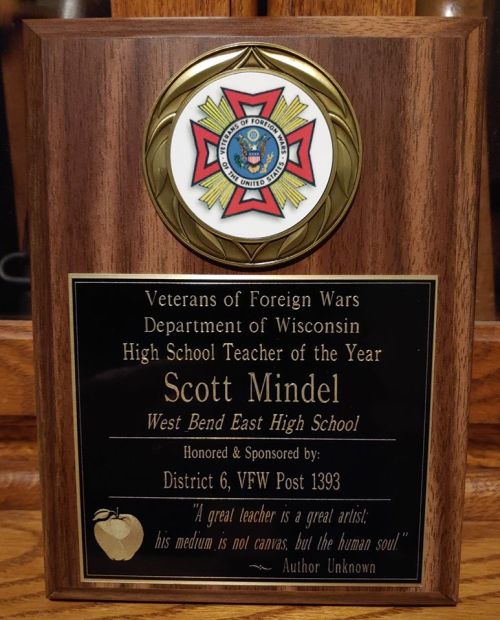