What are your thoughts about standards-based grading, the alternative to traditional letter grades that has been used this year in some high school classrooms?

“I like it because it’s in favor of the students.”
Mara Perkins, West senior

“I feel like it’s a more broad grading because there’s not as much of a variety of grading levels.”
Kinsey Kohls, West junior

“It was not a good experience. Depending on where the ‘standards’ separate it can be incredibly unfair. This system pushes all these students together to look identical rather than showing their strengths and weaknesses. The majority of the student population doesn’t like standards-based grading and we should not have that system implemented.”
Dorian Hendricks, East senior 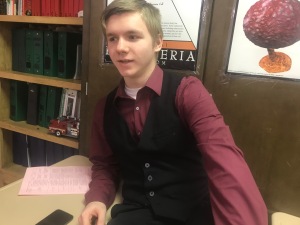 “It robs students of the opportunity to have a concrete understanding of how much they are actually learning. It takes what should be objective truth of how well you know the material, and risks turning it into essentially a guess or inference from their teacher.”
Sam Campbell, East senior

“I think that it should have only been implemented on the kids coming into high school and not those past their first year. It is also inconvenient because when it comes to Skyward (the online gradebook) I can’t tell what my grade is and just have to judge it off of sets of numbers.”
Travis Wiesner, East junior