Last month’s Robocop reboot is just the latest reminder that Hollywood’s recent track record with science fiction is pretty dismal, marked by uninspired remakes and a lack of artistic creativity.

This failure has only elevated the stature of 2012’s Looper, a rare exception that is perhaps the best sci-fi movie of the past four years.

Written and directed by Rian Johnson, this movie gave me a new take on the concept of time travel, and gave me hope that science fiction movies can be just as artistic and thoughtful as they can be action-packed and exciting.

The futuristic story involves the mob sending enemies into the past, where assassins wait to kill them.  Things get complicated when one assassin learns that his latest target is an older version of himself.

While it is rather sophisticated, and takes a good amount of attention, don’t get discouraged by the film’s complex plot.  At first, I was under the impression that I was going to be lost the whole way through, but I later realized that Johnson makes the movie easy to follow, even adding a bit of dialogue for Bruce Willis in which he roughly states, “Don’t try to think about it, you’ll just make your head hurt.” 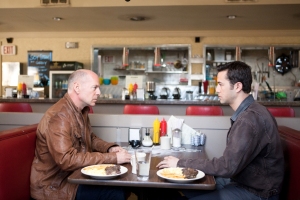 In that scene, Willis is trying to explain his time travel experiences to his younger self, played by Joseph Gordon-Levitt.

A great majority of the artistic element this movie offers is in making Gordon-Levitt look like a younger version of Willis. To generate this effect, Gordon-Levitt had to sit in a makeup chair for hours at a time being transformed to look like Willis, and let me tell you, they did a fantastic job. Watching the movie, you would never guess that the Joseph Gordon-Levitt in Looper is in fact the same one who appeared in 500 Days of Summer.

The other artistic elements of the film are achieved not only by the writing and originality, but also by the way in which both criminals and violence are portrayed. This movie forces you to not only sympathize with a drug-addicted assassin, but to also view him as both a victim and a hero, resulting in an ending that left me saddened as well as captivated.

As for the portrayal of violence, the movie seems to have some mixed feelings. Rian Johnson at first portrays death as a disturbing and gruesome act. While that doesn’t sound very artistic, consider how he shows that element without even showing any blood, or even directly showing the torture being inflicted on the victim. Instead, he shows the terrifying effect that Gordon-Levitt’s violence has on his future self in a bittersweet way that both shocked and amazed me.

But then Johnson takes a different approach, almost glorifying death with a combination of beautiful music, beautiful special effects, a particular use of slow-motion that I have never seen before, and a reinvention of a much used aspect of science-fiction. When you put those together, you have the most kinetic, aesthetically pleasing death scene in movie history—and you will never see it coming.

I guarantee to anyone who is interested in science fiction that you will not be disappointed by this film. If you liked any of Stanley Kubrick’s films, such as A Clockwork Orange, or Richard Linklater’s films, such as A Scanner Darkly, then Looper should definitely be on your list of movies to watch.