Hoffmann Transitions Back to Teaching 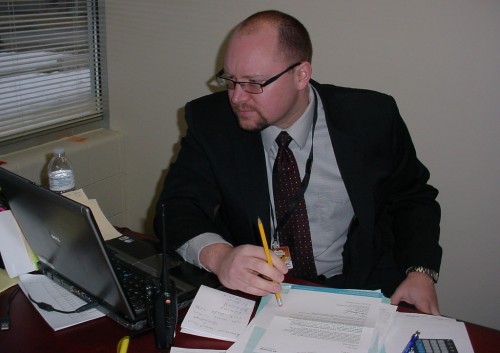 Matt Hoffmann works in the main office during his temporary role as assistant principal. He filled in for the outgoing Ryan Wilson during third quarter.

Although the end of the year is just out of reach, change is on the horizon for some WBHS economics students. They will receive a new teacher, yet this “substitute” is back for the rest of the year and is actually the originally scheduled course teacher.

When Ryan Wilson made the decision to leave his position of assistant principal for work at the district office, the position was posted online. East economics teacher Matt Hoffmann temporarily left his second semester classes with Andrew Wold, a substitute teacher. During the entirety of the third quarter, Hoffmann took on the position of assistant principal instead of teacher.

Now that fourth quarter has arrived, Hoffmann has returned to teaching economics, while the position of assistant principal has been filled by Jackie Kraemer, a representative from the district office.

Prior to third quarter, Hoffman spotted the open position online and applied. After interviewing with Principal Jim Curler, the two made an executive decision. He would be appointed the position without being forced to give up his teaching.

Just like any student with a plethora of extra-curriculars and AP classes, Hoffmann had to find balance between all of his duties. He has not ceased to lend a helping hand, whether it be in teaching economics, coaching high school swimmers, advising student council, nurturing his children, or stepping up to a new position.

“There were some really tough weeks, but I tried to do my best at whatever job I was doing. So when I was at the pool I tried to be a good coach, when in the office a good principal, and when I was at home, a good father. Not letting jobs get tangled up was important,” Hoffmann said.

As with any new venture, there were struggles to his new job. The position came with many responsibilities that differed from his days of teaching.

“The first few days were rough mostly for the secretaries in the office,” Hoffmann said. “I constantly asked questions about paperwork. Luckily, the other administrators and secretaries were very helpful and patient. With perseverance, I even helped guide some students sent down to my office toward the right direction to succeed.”

“Not letting jobs get tangled up was important.”
– Matt Hoffmann

Rather than the aspect of a newfound authority to enforce suspensions, Hoffmann enjoyed the position of assistant principal because he was able to help fellow teachers and students from a new perspective.

“I always enjoy showing teachers new ideas and tips that I knew helped me to teach. I’ve always seen the job [assistant principal] as a way to help people around me. I think I’ve tried my best to help teachers whether it be through my work as a data director or communicating with students struggling in their class with behavior. Regardless of the problem, I really have tried to make their jobs a little easier, and that’s what I will miss,” Hoffmann said.

From helping students make positive changes to researching the pros and cons of converting the school to a block schedule, school has been impacted by Hoffmann’s actions as assistant principal. “Mr. Hoffmann did a wonderful job and we appreciated his new viewpoints on student discipline and achievement. He really added a great sense of humor in the office, too!,” Curler said.

“I need to teach someone supply and demand, I’m going through a withdrawal,” Hoffmann said about returning to teach economics.

Learning names and reviewing may be difficult in the last quarter of a semester class. However, Hoffmann is eager to conquer the challenge and knows his mission for the school has not changed.

“If you are a teacher or administrator, we all have the same goal, and that’s to prepare students for academic and career success,” he said.