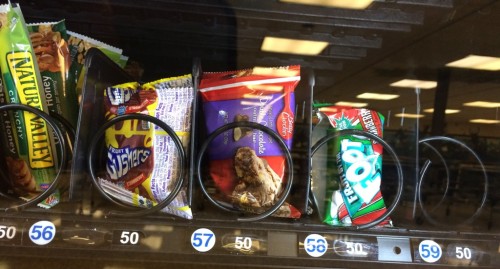 Wouldn’t it make your day to see your favorite meal on your lunch tray?  Or your favorite snack in the cafeteria vending machines?

In February, about 200 WBHS students made their way after school into the West cafeteria to taste test samples of 14 items that were new to the kitchen.  These new foods—such as burritos, pizzas, soups, and much else—needed student approval and suggestions.  The students’ opinions impacted the new menu.

Lynne Gross, the district nutrition specialist, said she spends about $1 million on food throughout the school year and she wants to know that students will eat what she buys.  Of the 2,400 students enrolled in the high school, on average 1,400 eat a school lunch every day.  Two hundred students participated in the taste test, which is 15 percent of the students who eat a school lunch.

The taste testers most enjoyed the stuffed crust pepperoni pizza and the Crispito tortilla chips.  The bread bowl filled with soups like broccoli cheese soup or tomato soup met expectations when 56 percent of the taste testers said yes to it.  Overall, Gross received very good feedback.

How could she not receive good feedback from students?  After all, students were eager to turn in their surveys for a chance to a win a Subway gift card or a 15-inch LED HDTV.

Thirty-five percent of the taste testers said yes to the new mushroom burger, which can easily be made in school kitchens. Gross said the goal is to make more food on site and create new recipes rather than taking food out of boxes.  The kitchen staff at the high schools already came up with the idea of mashed sweet potatoes in melted marshmallows.

Best of all, students will not have to wait long to see these foods on the menu.  Half of the items were immediately put onto the menu and the graham cracker PB&Js, which 75 percent of taste testers liked, were stocked in the vending machine as students sampled them.

The breakfast menu was added to with the Old El Paso breakfast wrap to go. The stuffed crust pizza is arriving on the menu this month and the bread bowl with soup will join the salad line soon. The Crispitos tortilla chips started showing in the Mexican bar in mid-February. Also on order in February was cherry juice, which turned out to be a big hit.

The renovations at Silverbrook Middle School will include a new kitchen full of new equipment.  Gross said they will test making the new recipes—including roasted veggies—at Silverbrook first and if all goes well the equipment and food can be brought to other schools in the district.

Soon vending machine rules will be changing to better control portion sizes and calorie count.  Gross said there will be another taste test for all the new vending machine options.  Also, students can add their input about what should go in the vending machines by sending an email to HSCafeteria@west-bend.k12.wi.us.

Thanks to one student’s suggestion, Fruit Gushers are now available in the high school cafeteria vending machines.