Who Does Number Two Work For? 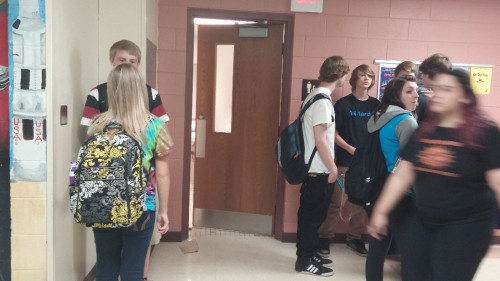 The men’s restroom near the East social studies hallway has recently been the scene of several mysterious scatalogical crimes.

School bathrooms have always been scary to germ-fearing students. However, school bathrooms in the last month have not only gotten grosser, but also weirder.

Recently a string of odd restroom mishaps has occurred in the high school bathrooms. According to Tony Groh, the second shift custodial supervisor, these messes have been noticeably frequent and far from usual. They include odd cases of somebody pooping in the corner, sticking used toilet paper to the wall, urinating into the floor drain, and smearing number two all over the wall. The reason remains unknown.

“You go into the bathroom, and it’s in the corner,” said Groh, recalling the recent episodes. “The last one was in the urinal.”

East senior Nick Blommel encountered one of these messes. Two weeks ago, Blommel went to the downstairs restroom located by the East science and math hallways.

“I walked into the bathroom and I instantly smelled it. I thought, ‘What’s new,’” Blommel said. However, he soon discovered a coat of brown painted on the stall. “I was mildly disturbed,” said Blommel, “but I have seen it multiple times.”

These types of unusual occurrences are not necessarily unheard of; however, they have been happening more frequently.  Groh reported that recently this kind of thing happens about once a week, with most issues coming from the upstairs bathroom in the East social studies hallway.

These problems, while unique, are becoming a concern for the custodians.

“It’s our job to make sure the bathrooms are clean. When this thing happens, it takes time out of the normal cleaning. I would like to know why. Maybe it’s just an art statement. If the toilets aren’t clean enough, just tell us. This doesn’t make our job any easier,” Groh said.

Beyond being an issue for the custodians, the bathroom mishaps also create health hazards for students and faculty. Making an unsanitary mess in a highly used public bathroom can easily contaminate the many people who use the bathroom.

But who could possibly be committing such gross crimes?

In the past, it turned out that some minor mistakes had come from disabled students, Groh said. “But I don’t think this is the case. I would hope it’s not a teacher,” Groh joked. “You never know about Mr. Beltmann,” he said with a laugh, referring to the school newspaper’s adviser. “He’d do anything for a story.”

All joking aside, the high school restroom string of mishaps must end. Students are advised to report any suspicious activity to administration.

2 responses to “Who Does Number Two Work For?”