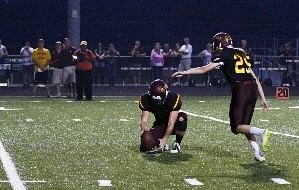 Stapelfeldt proves that football is not just for boys

As a soccer star, Rachael Stapelfeldt has always used her strong leg on the field, but this fall she surprised many local sports fans by using that leg to kick field goals.

The East senior is the kicker for the West Bend East Suns football team. Stapelfeldt, a shooting guard in basketball and midfielder in soccer, became interested in kicking footballs when she became aware that Brian Vetter, head coach for the East girls soccer team, was being brought on staff by head football coach Jeff Rondorf. After just one practice between Stapelfeldt and Vetter, they sent a video to Rondorf. After watching the video, the coach was pleased with what he saw and welcomed Rachael to practice.

How did that first practice go? “Nerve-racking and not knowing what to expect,” Stapelfeldt said.

Her teammates were not accustomed to a female on the team, and, frankly, neither were local fans who see football as a predominantly male sport. Still, her teammates were “open-minded and welcoming,” Stapelfeldt said. Her teammates have “no problem” with her being part of the team. She does not ride the bus with the team, however. Instead, she travels with Vetter and is already dressed upon arrival.

Mom and Dad were split about whether they wanted Rachael to participate or not. “Dad said go for it, but mom was iffy,” Stapelfeldt said.

Stapelfeldt is not just a novelty, she is also very good. In a game against Oconomowoc, “she made an extra point in some tough conditions on a cold rainy day that gave us the lead,” Rondorf said. Rondorf is pleased with her production. “If you’re down two or need a field goal, she eases that anxiety for you. She’s a weapon,” he said.

Friday is the last chance to catch Stapelfeldt in action as the East Suns take on Beaver Dam at 7 p.m. at Carl Pick Memorial Field. As the last week of the 2014 regular season winds down, she remains focused on trying to “minimize the misses and have fun.”