Hungry for a Heroine

Who all went this weekend to see Mockingjay—Part 1? I may have…twice already.

In one of the ending scenes of Catching Fire, the previous entry in the Hunger Games series, Katniss is carried away to District 13 by hovercraft. She is barely conscious, but she doesn’t mind. She thinks that she helped everyone to have a better tomorrow, and that is just fine with her; she is ready to die. But the directors were very clever in the way Katniss was carried up. They had the hovercraft’s “talons” pick Katniss up under each arm, making her look like she was Christ being crucified; a sacrifice for the good of the people.

And that is exactly what Katniss is willing to be during all of Mockingjay—Part 1. Actually, during one of the scenes discussing if she should go into combat, the president of District 13, Coin, asks, “And what if you get killed?” 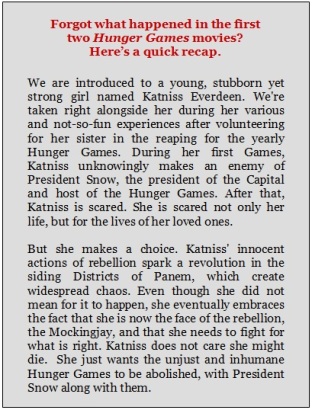 Katniss’ reply is one of a wholly good person with a cause worth dying for: “Make sure you get it on camera.” Again, she does not care if she dies, just so long as she can help take down Snow and the barbaric reminder every year of who is control.

Katniss’ way of being totally selfless is one of her best characteristics, I think. She cares way too much about people and that gets her hurt every time, but she cannot help it. In Mockingjay—Part 1, she travels to District 8 where there is a hospital filled to the brim with the sick and dying. But when all the citizens see her, it goes dead silent. One boy speaks up and asks Katniss if she is there to fight with them. Katniss, in awe, answers, “I am. I will.” She didn’t even need to think about it, and that takes a huge amount of courage to promise something like that, something that could end your life.

Katniss is a true heroine, I believe. I don’t believe this just because she is my favorite character in my favorite series, but because that is how Suzanne Collins created her to be: selfless, kind, caring, strong, independent, willing to die for the greater cause. One can only wish to obtain the qualities that Katniss does.

You can witness Katniss act on all of these traits by going to your local theater and watching Mockingjay—Part 1 now!

If you don’t want to go watch the movie, at least watch Jennifer Lawrence sing “The Hanging Tree” on YouTube. This is the haunting yet addicting song that Katniss sings during a propaganda video.