Prom Has That Sinking Feeling

When this year’s prom theme was announced, many students didn’t think about tuxedos, corsages, and a night of luxury. Instead, they thought about mass disaster.

West Bend juniors and seniors will board the Titanic for prom on Saturday at the Washington County Fair Park. The choice of theme has proven to be controversial.

“When I think of Titanic, I don’t think of prom,” said Kayla Keegan, East junior. She and many other students are confused about why this is the chosen theme.

East senior Morgan Czajkowski believes that the theme is inappropriate. “I don’t think the people who created it had intentions of offending anyone, but it is kind of insensitive. Prom is about having fun and a really great night, but the night the Titanic sank definitely was not a night full of fun,” Czajkowski said.

The creator of the theme, Alyssa Birkeland, said the student council did not expect the response received from students. “We thought people would like it and obviously there’s been more of a negative response than we would’ve anticipated,” said Birkeland, an East junior.

“Obviously there’s been more of a negative response than we anticipated.”
– Alyssa Birkeland, student council

Despite some of the negative responses, Birkeland still says she has no regrets over choosing the theme. She said that the student council members were thinking of the romantic plot from the 1997 movie Titanic, starring Leonardo DiCaprio and Kate Winslet.

“Titanic was a beautiful love story, you have to appreciate that part of it,” Birkeland said. “A lot of the people on our student council like the movie a lot and we thought it would be a cute idea for the prom theme.”

“I understand what the student council was trying to get at with the whole romantic side of the movie with Jack and Rose, but I definitely think the theme is a bit morbid,” East junior Isabel Ortiz said.

But that’s not what Birkeland was going for. “We didn’t think anyone would be caught up on the super morbid part, that’s not the way we were thinking of it,” she said.

Some students understand the choice of theme. East senior Maggie Moran thinks of the romantic relationship under the pressure of time and danger. She knows that some people think it is an ironic theme, but she likes it and thinks it is elegant.

Bill Greymont, WBHS principal, also thinks that this year’s prom theme is unique and interesting. “Titanic was history. Being a history guy, it was the ship of luxury and splendor for what it was supposed to be, you can’t help that it is associated with the captain making a poor decision and hitting an iceberg,” Greymont said.

Greymont said that the office has not gotten any student or parent complaints about the theme.

Prom tickets can be purchased in the bookkeeper’s office for $30. They must be purchased in advance. Student ID is required to enter. Prom begins at 8 p.m. and ends at midnight. Coronation will take place at 9:30 p.m. 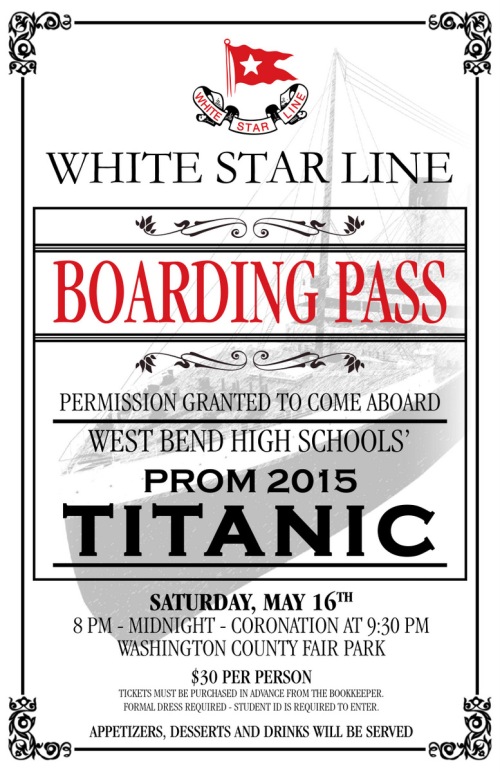 One response to “Prom Has That Sinking Feeling”