The Most Repetitive Time of the Year

Exactly what it says on the tin.

We’ve all seen them, the obligatory Christmas special that every TV show gets around this time of year. They’re often poorly thought out, rushed, and they always have the main character or the villain learning the (gag) “True spirit of Christmas.”

It’s lame, uninspired and a box to check on a script writer’s agenda list.

But you’re probably not wondering, “I’m a person that aspires to go into television writing (and a talentless hack), so I want to know how to produce Christmas specials.” So I present to you a complete template of how to make a cookie cutter Christmas special.

First things first on our dull little Christmas adventure: cover everything in snow! Want to express that it’s the holiday season in whatever setting the story is taking place? SNOW! Just spread some snow and ice everywhere, have at least one shot of it snowing outside and bam… instant Christmas!

Next on the list, choose your poison (story poison). You can either take the “doesn’t know the meaning of Christmas” route, the “can’t find the perfect gift” route, or the “save Santa” route or just retell A Christmas Carol like everybody before you. If your answer is one of the former, read on. If the latter, just accept that it will never be able to retell the classic better than Scrooge McDuck did, and be on yer merry way.

Now that you’ve chosen your cookie cutter problem, just shoehorn it into the story somehow.

The protagonist doesn’t know the true meaning of Christmas? Just have them go on a Christmas adventure until they realize what “the true spirit of Christmas” is. Villain doesn’t have the Christmas spirit? Have the main character give a good, long (preachy) speech about how “Christmas is about sharing n’ stuff.”

Protagonist having trouble finding the perfect gift? Just sell one of your prized possessions to purchase a very expensive object that the main character knows the person they are buying it for will love, only for them to find out that the person whom the gift was for has done the same thing as the protagonist—thus rendering both gifts useless! 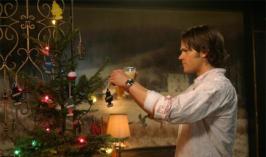 Need to save Santa? (Do I even have to elaborate with this one?)

So, Santa is saved, gifts are given and the value of a stock phase is truly comprehended. How can you possibly end this? Three words: Obnoxious. Holiday. Song. Something that even the most shameless purveyor of overpriced clothing would call “a lyrical abomination that no sane person could conceive” is preferable. Bonus points if the actors sound bored or in pain while singing them.

So there. A perfect mold for your limp and over-told story. But wait a minute. Are there any good examples of Christmas specials? Well…

Wow, Christmas episodes that either used Christmas to add to the story through good writing or just didn’t care and were good regardless. Wondrous, isn’t it? It’s almost like putting effort into a Christmas script can yield a plethora of unique ideas and make your show better and more respectable if you pull it off.

Perhaps that idea is “The True Potential of the Christmas Special.” (Wink.)