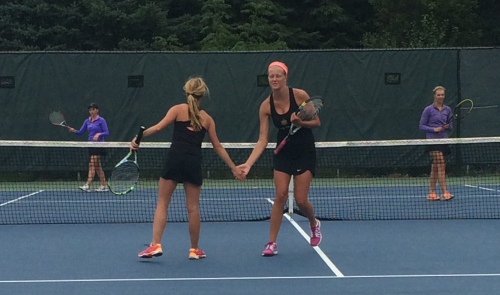 Each tennis state qualifier from WBHS is a valedictorian candidate

West Bend girls tennis has been serving up aces both on and off the court for the past four years.

This season four East seniors and one West junior qualified to play in the WIAA Division 1 Girls State Individual Tennis Tournament in Madison on Oct. 13-14. Perhaps even more impressive, though, is that all five girls have a perfect 4.0 GPA and are potential valedictorians.

“Ever since middle school I had the goal of being valedictorian but didn’t realize it was possible until sophomore year, when I still had a 4.0 and then I became more motivated to finish out high school as valedictorian,” Vande Zande said. “As for going to state, as a kid I never thought I would make it, but once I entered high school I realized it was a reasonable goal.”

Having high grades while being an athlete is extremely hard to do. It takes dedication and persistence. All five players train competitively year round at Pleasant Valley Tennis and Fitness Club in Jackson. In addition to intense training, many of the girls have set high goals for themselves academically.

“From a young age, I always wanted to be valedictorian and have a 4.0 GPA in high school,” Bembenek said.

Maintaining an impeccable GPA and constantly training is not always smooth. Often there is chronic stress, late nights, and lots of post-practice studying.

“I try to do my homework ahead of time or study when I’m not playing,” Bensen said. “I do get stressed, but when that happens I’ll take a short break to recollect my thoughts or do another activity.”

“From a young age, I always wanted to be valedictorian and have a 4.0 GPA in high school.”
– Brianna Bembenek, West junior

Despite the strenuous work it takes to be a student athlete, the girls recommend younger students consider playing a sport because it teaches time management and responsibility, and creates lifelong friendships. They also mentioned that playing a sport pushes you to have high grades.

“I would tell younger athletes to enjoy the process of grinding and improving,” Schaetz said. “Nothing worthwhile comes easy, and if you’re working to excel at anything, you must expect hurdles along the way.”

At the state tournament, East’s two doubles teams (Bensen/Vande Zande and Schaetz/Rieke) each won their first round match but lost their second match to extremely challenging teams. West’s Bembenek lost her first round match at No. 1 singles.

All five girls are currently planning to attend a four-year college, with Bembenek expressing the ultimate ambition of medical school. They are hopeful to pursue their love for tennis through the option of club teams at the collegiate level.

“I plan to attend a four-year college, but I am currently undecided on which school. I plan on playing club tennis in college if that is a possibility,” Rieke said.