Houck is the older of the two gentlemen and has traveled a unique road to where he currently works in Norman, Oklahoma.

During his time as a student-athlete at West High, Houck played baseball and basketball all four years and played golf his freshman and sophomore seasons. He served as a basketball co-captain his senior year.

When asked about his favorite class in high school, Houck hesitated.

“That’s a tough question considering that’s a quarter of a century ago!,” he said. “One that comes to mind is trigonometry. It’s not because I particularly excelled in it, but I remember enjoying my teacher, Bernie Uebersetzig, and his approach to the class. He was fun and effective.”

After high school, Houck attended the University of Wisconsin-Madison where he focused on classes, intramurals and having fun in college. He also majored in journalism.

Houck started working at the University of Oklahoma in the summer of 1995.

“I started as an intern in August, one week before the first football game of the season,” he said.

From an early age, Houck knew OU was the right fit for him.

“I fell in love with the Oklahoma football team when I was in kindergarten growing up in Pennsylvania, and my love for the Sooners extended to the men’s basketball team while I was in high school,” Houck said. “They were my favorite collegiate teams, and I never would have pursued the internship opening at OU had it not been for my affinity for the athletics program there.”

Over the last two decades, Houck has been fortunate to work alongside some of the greatest athletes and coaches in the NCAA.

“I’ve been here for 22 years (worked directly with men’s basketball for 20 years and with football the last two), so as you can imagine I’ve met and worked pretty closely with hundreds of [talented people],” Houck said. “Some of the more renowned basketball names are Blake Griffin and Buddy Hield, who were consensus national players of the year.”

Mike Houck with Blake Griffin, the 2009 National Player of the Year. Photograph courtesy of Houck.

Recently, Houck was on a business trip as the Sooners took on the Auburn Tigers in the Sugar Bowl.

“I actually was in New Orleans for the Sugar Bowl a couple weeks ago and saw Buddy play for the Pelicans, and he gave my wife and I a ride back to our hotel after the game,” Houck said. “They’re both great guys and I developed extremely close working relationships with both of them due to the amount of media attention they received.”

Oklahoma football is one of the nation’s most decorated football programs.

“I had the opportunity to work with Heisman Trophy winners Sam Bradford (won in 2008) and Jason White (2003), and Adrian Peterson,” Houck said. “Numerous other NFL guys, as well.”

The University of Oklahoma has a special place in Houck’s heart.

“I enjoy several things about OU,” he said. “Among them are the size of the campus (not too big, not too small), the family atmosphere and the across-the-board strength of our athletics program.”

There is a comfort level for Houck and his family.

“I’m in my second year in my current role, so I plan to continue to do this for a while,” he said. “My wife, Tara, is from Oklahoma and we have a five-year-old daughter, so we plan to stay in the area.”

Unlike Houck, who made his way south, Craig Pintens ended up on the West Coast in Oregon. 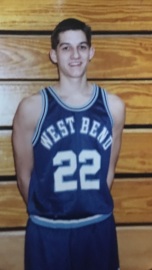 Pintens in high school. Photograph courtesy of the Pintens family.

Pintens graduated in 1994 from West where he played baseball, basketball and participated in forensics for the Spartans.

“Although my athletic career was of little distinction, I was a two-time national qualifier in forensics,” Pintens said.

Pintens received his college degree from the University of Wisconsin-Whitewater with a major in marketing and continued his education with a degree from Marquette Law.

“In college I participated in intramurals and was President of the Honors Student Association,” he said.

A decade later, Pintens accepted a job offer from the University of Oregon.

“I started at Oregon in September of 2011,” Pintens said. “I accepted the position the Tuesday before the LSU-Oregon football game in Cowboys Stadium, which made that game extremely awkward as I was working at LSU at the time.”

Similar to Houck, Pintens has worked with outstanding student-athletes and seen incredible success at Oregon.

“Since 2010 we have won more national championships than any school in Division I (15),” Pintens said.

“It is amazing to work with so many talented student-athletes that are in the national spotlight,” Pintens said. “My all-time favorite student-athlete at Oregon is Jeff Lockie, who took full advantage of his opportunities here by graduating with not only an undergraduate degree, but an MBA also. He is an incredible young man and will be very successful in whatever profession he chooses after school.”

(Top image: Mike Houck cuts down the net after Oklahoma defeated Oregon in the Elite Eight to advance to the 2016 Final Four. Photograph courtesy of Houck.)