Which Makes Thee Startle: A Story of Mice and Men

The East Library has a new mascot: The Sun, a small mouse often seen scurrying for a crumb or in between book aisles.

Mice have been seen roaming the West Bend High Schools since early August, most commonly found in the West science area, the East Library and the Nifty Nibble, which is the student-run campus restaurant. The mice are sometimes dead and sometimes alive. The most recent sighting of mouse droppings was today in the West social studies area.

“I had to move a box to get something and a dead mouse fell at me,” Arps said. “And it was shriveled and it was decomposed. Pretty gross. And it fell right on me.”

Afterwards, all clothes that were damaged or left on the floor were thrown away.

“[The custodians] brought in a big dumpster, and it was heaped with clothes,” Arps said.

In September, Danielle Konstanz, a West English teacher, also encountered a mouse in the East Library.

“I turned around and right by the door, where the couches are, was a little mouse that zoomed and zipped past the door and went beneath the couches and the chairs,” Konstanz said. “I realized what I saw, screamed and jumped back behind the desk in East Library. Luckily, there were no students.”

In addition, Alexis Mull, a West sophomore, found a mouse on the second day of school in the A hallway, about five feet from the West cafeteria. She stated that her encounter with the mouse makes her nervous for people who eat school food.

“The school nutrition department has not been made aware of any activity in the serving areas of either cafeteria,” said Abby Padilla, director of school nutrition. “As for the kitchen area, we take every safety and sanitation precaution to ensure all food areas are clean.”

Arps heard that there have been mice near physics classrooms.

“One of the teachers smashed it with a book or something,” she said.

“I realized what I saw, screamed and jumped back behind the desk.”
– Danielle Konstanz, West English teacher

West science teacher Brian Mohs first encountered a mouse in early August in the chemistry stockroom. However, this mouse was dead.

Within a three-day span, four mice were either seen or killed in the science area. Mohs has also had a baby mouse intrude on his class time.

“[The students] wanted to see it,” Mohs said. “We had it underneath a beaker until we were going to figure out what to do with it. It was trying to scurry under but the lip is not big enough for it to get through that. Others were kind of a little uneasy but no one was screaming and on top of counters and things like that. They just wanted to know what we were going to do with it, and some were actually trying to help us keep track of where it was so we could catch it and things like that, but yeah, it’s obviously a distraction.”

“I was sitting up in the front, and it ran by the cabinets while Wanie was lecturing, and I was like, ‘Oh my god! There’s a mouse!,’” Aldstadt said. “And Wanie’s like, ‘Yeah, it’s been running around West science all day.’”

Paul DeLain, a West science teacher, has seen a mouse four times this year, but does not know if it was the same mouse multiple times or four different mice.

DeLain caught two mice in beakers and took them outside, but accidentally stepped on another. He has also seen mice in Wanie’s and Mohs’ rooms.

“Our school actually has stick traps and traps along the perimeter of the building to catch rodents,” DeLain said. “I know that they are very vigilant and they get on it right away, but for every mouse you see, there’s 10 you don’t. That’s how good they are at reproducing. Also, all mice need is the diameter of a pencil to get into someplace.”

Students work Wednesday in East Library, where mice were discovered living in a back room. Photo by Jessica Steger, Editor in Chief.

DeLain believes the increase in mice population could be related to students’ freedom in choosing where to eat and then not cleaning up after themselves.

“In 25 years of doing this job, we haven’t seen mice like we have this year,” DeLain said. “What’s changed? Everybody’s letting everybody eat everywhere.”

Kara Petzold, a West science teacher, had an incredibly close encounter in November with a mouse. While in the teacher workroom, a mouse ran over her foot and then under the copy machine.

“I was ready to throw in the towel for the day,” Petzold said. “I screamed really loud, and Mr. Mohs was the only other one here, but luckily he had his music on really loud, so he didn’t hear me scream. We’ve been looking to see if we can find a trail of droppings or anything like that, but, so far, we have not found where they might be coming in from or anything like that.”

“We maybe need to go back to just being more strict on food only is in the cafeteria because we didn’t have this a few years ago and now that we are a little bit more lax on food rules in classrooms and in the hallways and that sort of thing, it seems to be increasing the problem,” Petzold said. “And I think there’s more days than not, there’s crumbs in the hallway and wrappers left behind, so I think that is really our issue.”

But Petzold has another theory as well.

“Last year we didn’t really notice an issue at all, and this summer they did some work on the roof leading into the pool and the fieldhouse, and so maybe there were some nests in there that got disturbed, and then they kind of moved in from there,” Petzold said.

West Principal Ralph Schlass believes part of the problem lies in doors being left or propped open by some students and coaches.

“And when it gets cold out, mice come in the building because it’s warmer,” Schlass said. “We’re fighting a battle where we might catch five in a week in traps and we’re probably letting in another 20 in the building. I’m exaggerating, of course, but therein lies the problem. You leave those doors open just a crack and if students go out for lunch, and they prop them open with pencils or whatever the case might be, a mouse can scoot right through there, and that’s what’s happening.”

Mouse droppings were found both underneath (pictured) and inside old cabinets in the Nifty Nibble. Photo courtesy of Sally Heuer.

Even the Nifty Nibble has had its fair share of mice this year, with at least a dozen found in boxes, according to Sally Heuer, a West family and consumer science teacher who also advises the Nifty Nibble. However, these mice have all been dead. Heuer has seen no live mice in the Nifty.

“That would make me leave right away,” Heuer said. “That would be my final straw. I would have to go home for the day because that would just be too traumatizing. I do not live well with vermin.”

Last summer, mice left droppings on the floor and got into some pasta and coconut in the Nifty Nibble. This food was unopened and stored in a cabinet, but the mice got into it anyway.

“All that food was thrown away,” Schlass said. “What we made sure we did is we professionally cleaned that area. The cabinet in which that food was in, I had that thrown away. I had it destroyed, and I ordered a new stainless steel cabinet. We had to order new food and soap. Nobody was at risk of anything.”

Heuer believes that old cabinetry was part of the problem.

“We had some cabinetry that we knew needed to be replaced, but cabinetry is expensive and so obviously if you want to keep pests out, you need cabinetry that closes tightly,” she said. “We didn’t have that.” 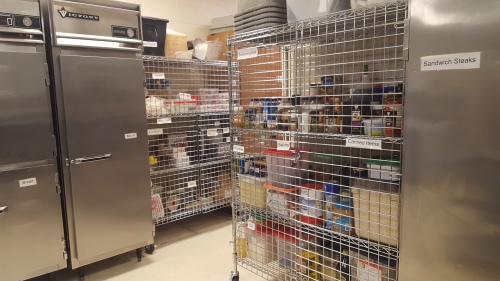 The food storage area for the Nifty Nibble has new stainless steel cabinets. Photo by Jessica Steger, Editor in Chief.

The Nifty Nibble works with Batzner, a pest control company. Joe Olsen, a Batzner representative, came to West Bend after this incident. He spent an hour in the food service area and another in the Nifty Nibble, even crawling into the ceiling to check for mice. No mice were found in the ceiling panels, but an open conduit was found. This is where Olsen believes the mice were coming from.

“Would I eat here? Absolutely, I would,” Heuer said. “At the beginning of the year, because of that situation, we sanitized every surface in this restaurant, like it could not have been any cleaner, and, you know, we have people that work really hard to clean and sanitize. I bought the foam and put it around all the pipes. And I am not a handyman, but it’s doing the job. We’re going to do our best and continue to do our best, but I dare say, this is probably cleaner than a lot of public restaurants.”

While all Nifty workers learn about integrated pest management, an anonymous Nifty worker was not aware of the mice problem until asked.

Schlass has a message for all students on how they can help end the mice problem.

“Don’t grab a cookie from the school store and then leave half of it uneaten in your locker, because there are vents and they can smell things like that,” he said. “Mice can travel in the smallest of spaces, so I’d ask that students, the only thing students can do, is just make sure that they throw away their food if they’re not going to finish it. Put it in a Tupperware where it’s sealed. If you see a mouse in the building, let somebody know, and then let the administration know and I’ll follow up with custodians, which I’ve been doing.”

4 responses to “Which Makes Thee Startle: A Story of Mice and Men”