Science at the South Pole 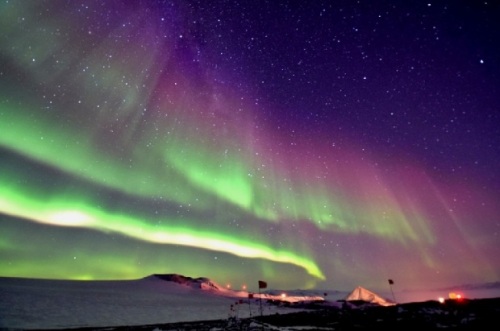 The recent cold snap won’t bother Elizabeth Widen. After all, she spends much of her time in Antarctica.

Widen, a research scientist, gave a presentation to students in Paul DeLain’s Advanced Placement Environmental classes Jan. 30 in the Silver Lining Arts Center. Students learned about the research going on at the bottom of the planet.

For 44 of the past 60 months, Widen has been working on and off at the three U.S. research stations of McMurdo, Palmer and Amundsen-Scott South Pole. The longest time she has stayed in Antarctica at once is 54 weeks—that’s just over a full year. Widen believes the research she and other scientists do in the Antarctic is extremely important.

“My job as a research scientist is to run, maintain, calibrate, repair, and take data for all the year-round science projects,” Widen said. “Most projects are done in the summer, but there’s anywhere from 15-19 projects that are continuously running the whole year and those are the ones I operate.”

“One of the most amazing things about Antarctica is that it’s the one place in the world where countries around the globe have agreed and work together to protect the Antarctic environment and use it solely for scientific purposes,” Widen said.

Several countries have made claims of land areas for the purpose of establishing their research stations, but no country is allowed to own property. DeLain thinks this is also an extremely important aspect of the work going on here.

“Although we have our own U.S. bases there, it’s a collaborative effort by the globe to better understand the planet we all share,” DeLain said. “There’s a lot of countries down there doing research, and at times they share their information. Antarctica should be a model for the rest of the world.”

DeLain thinks it’s important for students to understand the effect the actions of the human population have on the environment. So, when DeLain heard about this presentation, he wanted to donate money to Widen through SEED (Saving Earth Every Day), the WBHS environmental club.

“We wanted to sponsor her, so she knows there’s value to what she is presenting,” DeLain said.

Widen respectfully declined the donation, but instead requested that they donate the hundred dollars to the Penguin Research Fund.

“Countries around the globe have agreed to use Antarctica solely for scientific purposes.”
– Elizabeth Widen

“This was a great opportunity for students and West Bend, 43 degrees north of the equator, to learn about other places on the planet that are affected by us, and are influencing us,” DeLain said about the value of this presentation. DeLain knew that students learning more about their effect on the environment was a huge step toward helping protect it against climate change.

Widen referenced CFCs, or chlorofluorocarbon chemicals, that were used in a variety of products until they were banned from use in 1987. The impact on the environment in such a small period of time has been great as a result of such a small action. Widen asked students to imagine what could happen if even larger steps were taken to protect against global climate change.

“The discovery of the hole in the ozone is one of the most important discoveries that has come out of Antarctica,” Widen said. “But what I find even more important is that we discovered if we change our behaviors, in that case we stopped using CFCs, we can change our impact. This last year MIT announced that the hole is slowly recovering.”

West junior Matthew Kruepke was struck by the sheer beauty of Antarctica.

“It’s beautiful, it really is,” Kruepke said. “I really got it. It shows so much about global warming in our world as a whole, and we can learn so much.”

Ashleigh Kasten, a West senior, said that she thinks it’s important to learn about this forgotten continent because it’s rarely taught and it’s an important part of the earth.

“We only have one [Earth], and we need to take good care of it,” Widen said.