At the Oct. 29 school board meeting, the West Bend High Schools multicultural club called for the district to recognize Martin Luther King Jr. Day. The club proposed that the holiday, which falls on the third Monday in January, be a no-school day for both students and staff. Members of the club believe that acknowledging the holiday in this way not only honors King, but shows that the district’s black students are valued by the community.

Evans, a West senior who represented the multicultural club at the board meeting, emphasized the importance of remembering King across the district. As a black student, Evans feels that without King’s civil rights efforts, she would be seen as insignificant.

“If he was never around, no one would probably let black kids into white school districts,” Evans said. “We would not matter at all to a town like this. I feel like he’s just a really important person because he has done so much and everybody knows him. But we get no recognition of him in this school district, which is ridiculous.”

West junior Jada Williams, another member of the multicultural club, thinks that giving students and staff the day off would actually be an opportunity to educate others.

“The club and myself, we see firsthand what happens when a community is poisoned by ignorance,” Williams said. “We believe that education is the best way to combat this. We think that at least having off or recognizing MLK Day would be a great place to start.”

Joel Ongert, the president of the school board, explained that the upcoming MLK Day, Jan. 21, will be a professional day for staff, so students will have off. Additionally, after Evans’ speech at the recent school board meeting, the 2019-20 district calendar was approved. Currently, MLK Day will again be a day off for only students, not faculty, in 2020. 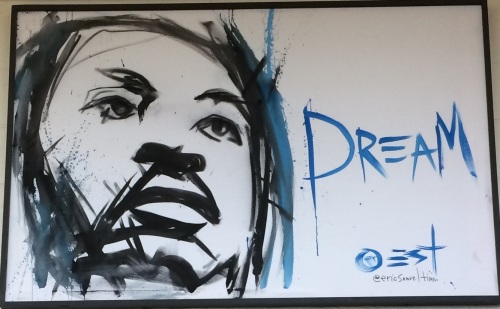 Superintendent Don Kirkegaard pointed out that there are other holidays in which students and staff do not have off, such as Veterans Day, Presidents Day and Columbus Day.

“Those are all holidays,” Kirkegaard said at the school board meeting. “I’m not saying they’re more important ones, but the key is, as we build the next calendar, that we truly want to look at everything: what’s best for kids, what’s best for teachers, how do we come across, make sure that we get the right amount of hours in for the kids, as well as the opportunity for meaningful vacation time and go from there.”

Kirkegaard also said that the calendar committee will begin planning the 2020-21 school year calendar in December. At that point, they will be able to generate suggestions for how to allow both students and faculty off of school on MLK Day.

“We are open to having a serious conversation about it,” said West principal Ralph Schlass, who is a member of the district calendar committee.

If the committee can make it work, West Bend will be the only school district in all of Washington County to allow both students and staff off for the holiday. This year, other districts in the county either have school for all or, in the case of the Slinger School District, a professional day for staff.

Ongert and Schlass indicated that when developing the calendar, the committee considers the state-mandated number of required instructional minutes for students, the number of staff work days, all holidays, as well as the first and last days of school.

Barseana Simond, Evans’ mother and the adviser of the multicultural club, believes it is unfortunate that the club must justify recognizing MLK Day in this way.

“Not honoring MLK Jr. Day in the school district negatively affects all students, especially students of color,” Simond said. “MLK Jr. was black, like many of the students within the district. When students do not feel valued, they contribute less, or not at all. Having a school district full of differences, all should feel included and the district should make every effort possible to include all. Not honoring the day gives a false message that all students are not worthy.”

Simond also expressed that it is imperative for students to learn about King and his activity during the civil rights movement.

While she was at the Oct. 29 school board meeting, Simond was told that the district calendar is created based on community values, among other factors.

“I wonder who in the community is surveyed about their values,” Simond said. “I am a West Bend taxpayer, like many others. I do not recall anyone asking my family about our values.”

School board member Tiffany Larson says that when she was growing up in Florida and living as an adult in Atlanta, MLK Day was routinely a no-school day for both students and staff. Thus, when she moved to Wisconsin 20 years ago, she was surprised that not all districts closed schools in recognition of the holiday.

“In my opinion, if students attend school, the day becomes an ideal teachable moment to learn more about Dr. King’s contributions, service, as well as reflect upon his message,” Larson said. “If students are out of school, community service in tribute to MLK might also be ideal. If the district were to schedule MLK Day as a day off for students and staff, I would support the decision.”

Larson added that she is not aware of any past attempts to make the holiday a no-school day for WBSD students and staff.

However, Evans explained that this is not the first time that this issue has been brought to district officials.

“We’ve been asking about this since my brother was in high school, and he’s currently 21,” Evans said. 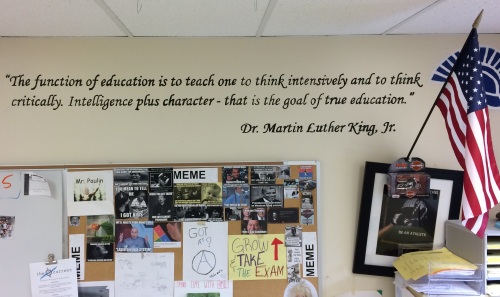 A quote by Martin Luther King Jr. is posted in the classroom of West social studies teacher Aaron Paulin. Photo by Samantha Dietel, Editor in Chief.

According to both Simond and Evans, the topic had been discussed with previous superintendents, including Kirkegaard’s predecessor, Erik Olson.

“He said that it was something he was going to work on, but now that he’s not here anymore, no one’s working on it,” Evans said.

Evans elaborated that she and Olson had discussed recognizing not only MLK Day, but Black History Month as well, which was celebrated at WBHS for the first time last February.

“(Black students) are such a minority here that nobody really seems to care about anything that matters about us,” Evans said. “And we don’t even recognize Black History Month, because I had to fight the administration last year to get them to even say anything. So if it’s not recognized this year, you’re just telling your students that you don’t care about them. So why would they want to come to school?”

Planning the Black History Month celebration in February had been the primary focus of the multicultural club last school year. Beyond that, Evans believes that the club’s goal has been to let the school district know that there are black people in the community who want to contribute, and that all they need is the chance to do so.

“I feel like just being black, you want to know that you matter because society always tells you that you don’t, especially in a predominantly white school and town and community,” Evans said.