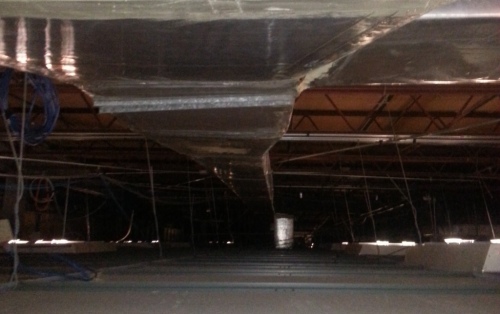 What’s the deal with the notorious East Whistle?

Walking through the hallways of the West Bend High Schools, one is frequently greeted with a barrage of noises: the slamming of lockers, the whispering of gossip, and the scuffle of students’ shoes as they rush to get to their next class on time.

One of these various sounds, however, has gained quite the reputation.

Dubbed the “East Whistle,” this infamous banshee-like screech can occasionally be heard in classrooms along the R and S hallways, located by the East English department. This strange noise has been present for at least 10 years.

Erica Gilhuber, a senior at East, remembers the noise from her freshman year of high school.

“It was very loud, very high-pitched, and very distracting,” Gilhuber said. “It got to the point that the teacher would point out that it was going.  And then the students would talk about it during class.”

“I could see how, for some kids, [the noise] could really throw off their concentration,” Brace Krueger said. “I think that’s why I started using fans. When I have kids in a silent activity, I put a fan on just to muffle. And doing that was helpful during the high-pitched whizzing days because it would kind of blend that sound and create white noise.”

Many high school staff members have devoted time trying to figure out what the source of the whistle is and how to put an end to it. However, the mystery has been difficult to unravel due to the fact that the whistle isn’t heard every day.

So, what exactly could be causing the whistle?

According to Dave Hamilton, a maintenance worker, there is a lot of speculation regarding the East Whistle.

“I don’t know that anyone has ever looked at (the whistle),” Hamilton said. “Because it doesn’t really hurt anyone. The speculation is the air is whistling through the vent and there’s something blocking it.”

Hamilton also has a more humorous theory regarding the source of the East Whistle. “We do have hamsters that are up there,” he said. “They’re running the fans. We keep a bunch of them up there for the science department. They’re running and (probably) shaking the belt. Maybe the belt is slipping because they’re running too fast.”

HVAC technician Greg Bayer credits the whistling sound to the arrangement of the schools’ ductwork.

“It’s just the ductwork whistling a little bit,” he said. “Nothing major.”

According to Bayer, it looks like the East Whistle is here to stay. Fixing or replacing the current ductwork would be a huge cost to the school.

“(Fixing the ductwork) is a major expense,” Bayer said. “That’s the way it’s going to be. If (the schools) ever do a major renovation, then that would change. But I don’t see that getting done for a long, long time.”

(Image: The ducts above the ceiling tiles along the S hallway. Photograph by Isabel Krueger, Current Staff.)