It’s not every work day that Aaron Paulin must rescue two English teachers.

Paulin, a West Bend West High School social studies teacher, was seated near the front at the March 3 teacher in-service, and when presenter Ted Hayes wielded a mock weapon, instinct told him to act.

Hayes was walking towards East English teachers Kimberly Barrett and Gail Rathsack, and pretended to pull out a gun. They, along with Paulin, jumped the speaker. While Barrett and Rathsack had been tipped off, Paulin was not.

In addition, new safety placards were put up in every room earlier this year, detailing call signs such as hold, evacuate, lockdown, and shelter. Practice lockdowns and holds are both legally required precautions once a year. The length of the drills must be logged and afterwards staff members reflect on the drills.

“We practiced everything years before this command placard came out,” Paulin said. “I think it’s more important to actually practice this and not just discuss it.” 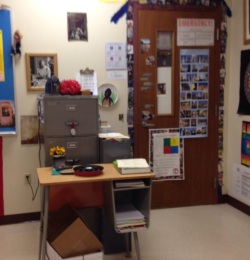 After the March 3 teacher in-service, Spanish teacher Beth Kastner moved a file cabinet closer to her classroom door. If an attacker were trying to gain entry, Kastner could use the file cabinet to quickly block the door. Photograph by Kaitlyn Von Behren, Current Staff.

Ryan Tomczyk, assistant principal, believes that the new call signs are easier to understand than the previous ones.

“If you have a visitor in the building or you get confused, then it’s very easy to know what each of the commands are to keep everything safe,” Tomczyk said.

When Hayes made his move, Paulin, Barrett and Rathsack were the only staff members to act.

“No one got down,” Paulin said. “They just sat there and watched us struggle. No one flinched.”

Paulin believes that although it was a simulation, other teachers and members of administration should have taken action on instinct.

Barrett said that had she not been tipped off, she would not have jumped the speaker, but that if there were students in the room, it would have been different.

“Not saying that my colleagues aren’t important, but in that instance, we, as teachers, our main priority is the safety of our kids,” Barrett said. “You never know in the moment, because your mind switches to many different avenues.”

“We should still continue to work on safety,” Rathsack added. “I think that (in-service) was just the tip of the iceberg.”

Paulin goes through his safety plans the first week of the school year. He believes that every class needs to go through safety procedures, as the plans will be slightly different depending on their location in the school.

“Every class has different threats or different opportunities or different difficulties,” Paulin said. “I have the luxury of having a roof so that I can climb out a window. You go down into Mr. Inkmann’s room or Mr. Zappia’s room, if you go out the window, you drop 40 feet. So your plans are going to be different for each classroom and as a student you need to know each plan based on your location.”

Paulin believes that self-defense training as part of in-service or professional development days would be beneficial so that staff can be better prepared for more common emergencies, like fights.

“I look at all the students and the first thing I want to establish is safety. We need to train some teachers to turn that switch.”
– Aaron Paulin, West social studies teacher

“I certainly believe that in today’s society, in today’s climate, there has to be an increase in safety awareness, practice, and procedures,” Paulin said. “I’m a parent. I look at all (the students) and the first thing I want to establish is safety. We need to train some teachers to turn that switch. Gotta be a little aggressive and be prepared. If it’s a fight, are you just going to wait until somebody’s losing teeth before we step in?”

Beth Kastner, East Spanish teacher, said that the training seminar taught her two new things in order to keep her students safe. The first, in the case of a lockdown, is to pour water on the floor in front of the door. The second, in the case that students would need to evacuate the school and run, is that taking off bright clothing, while uncomfortable, is a safety precaution that needs to be taken. She also regularly discusses safety and self-defense with her students.

During practice drills, Kastner said her students have been overall “very cooperative” and “kick-butt.” However, she believes there is still room for improvement.

“Instead of doing a Compass lesson that students get belligerent about, maybe (safety) would be more important to talk about,” Kastner said, referring to the behavior mini-lessons that students receive every other Friday.

Kastner is concerned for colleagues with doors that open to the hallway, along with some other staff who are not as well-prepared for a potential lockdown.

“I am questioning how they’re going to handle it because I know that’s a real issue for some people,” Kastner said. “They can’t handle any confrontation, much less this. It’s beyond anything. That’s probably more of a problem to kind of seek those people out or people who can’t handle the normal classroom. How can they possibly do this, too?”

Paulin suggested that a simulation where someone pulls out a gun, similar to the simulation at the teacher’s seminar, might be good to do at the school. He said that administration would need to inform parents beforehand, but that practice is needed.

There are no current plans to do a simulation like that with students in the building.