‘I Couldn’t Just Sit Back’: Protest Organizers Call for Change 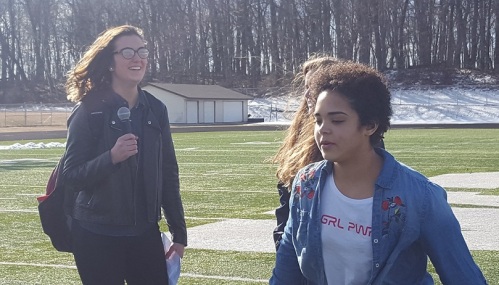 WBHS students are divided about how to address school violence

Four West Bend teenagers have taken the lead after the recent school shooting in Parkland, Florida.

EMPOWER, a branch of the Women’s March campaign designed for youth to voice their opinions, initiated the nationwide walkout for high schools. This event lasted for 17 minutes, in memory of the 17 victims who were killed in the Parkland shooting. In West Bend, some students engaged in this organized event. However, most students remained inside the building, not wishing to participate.

After WBHS administration gave its approval, the four teens started making their plans. Both Kramer and McClain said they felt that someone needed to take initiative.

“Every action, everything you do has consequence and makes some kind of ripple in the world,” McClain said. “You can be a factor for change.”

Kramer describes the sort of obligation she felt to organize the walkout as being prompted by the Parkland shooting, which she believes to be a turning point for the nation. 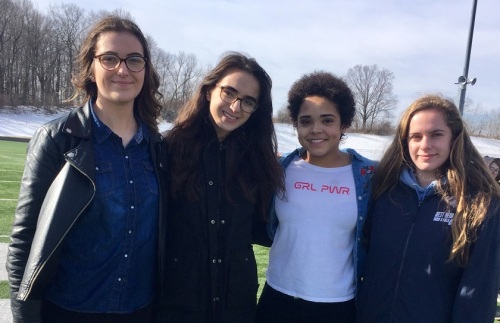 “I have a real passion for social justice so I really wanted to go out and do something about it,” Kramer said. “I couldn’t just sit back. You can look at any point in history, nothing ever gets done if you sit back and do nothing. People have to raise their voices, just like the Civil Rights movement. Do you think anything would have happened if no one had gone out and protested? I think definitely in the future there will be change. This is just one of the first steps.”

According to Prahl, the walkout was a time when students could come together, to show respect for the fallen and also to emphasize frustration toward gun violence.

“It’s a good act of solidarity,” Prahl said. “We all know we are in this together, we all want to see an end to violence in schools.”

Williams also believes that the goal of the walkout was to not only memorialize the lives lost, but to also show the determination of the youth community.

“I felt the need to organize this event to stand with the rest of our country and to prove the older generations wrong,” Williams said. “Constantly, our generation is criticized for almost everything we do. Today we showed how much strength we truly have.”

Our generation is criticized for almost everything we do. Today we showed how much strength we truly have.”
– Jada Williams, West sophomore

While this demonstration was taking place on the field, inside the building is where most students remained, and classes continued.

West ninth grader Lance Guttormson was among the many students who decided not to participate. He believes that the purpose of the walkout, defined by the Women’s March Campaign as a protest for gun reform, will not prevent gun violence.

“The problem here is not a lack of gun control, as the walkout and its organizers claim it to be,” Guttormson said. “Children do not decide to shoot their fellow students because they have guns. They choose to shoot because they feel they are not loved. The problem is with the breaking down of family structure, including the increase of single mothers and the rise of child abuse.”

East sophomore Sam Campbell has similar beliefs to Guttormson, saying that the push for gun reform is not effective. Campbell planned to wear a shirt in support of the National Rifle Association as a form of counter protest, but was absent Wednesday.

“There isn’t a set opinion of how people should be thinking,” Campbell said.

All four of the event organizers agree that any form of counter protesting is acceptable, because anyone has a right to their own beliefs.

“I think it is the student’s right to stay inside as it is our right to demonstrate,” Williams said. “The unfortunate thing is that many students who choose to stay inside criticize those who participate.”

“If you truly wanted to honor them you’d do something, such as a balloon release or putting their names on your T-shirt,” East senior Lori Hess said. “Or even just writing a letter to their parents saying, ‘I’m sorry.’” Photo by Jessica Steger, Editor in Chief.

“We’re not here to make a statement just about guns, that’s not what it’s about,” Kramer said. “It’s about how people should be able to feel safe in their own schools and how this shouldn’t happen anywhere. And I think that’s the point that a lot of people are missing.”

West junior Scott Henrich acknowledges that the walkout wasn’t strictly about gun control, but he says talking about the Second Amendment is inherently involved in it.

“I don’t support any more gun control except for slightly more strict background checks and mental assessments,” Henrich said. “I support everybody that is walking out, but I just don’t feel it is right based on what I believe.”

When the news of the Parkland shooting was revealed to the world on Feb. 14, devastation was widespread. Prahl thinks that this overwhelming sense of grief felt by people, especially high schoolers, is a factor in the mood of the walkout as well.

“We all know we are in this together, we all want to see an end to violence in schools,” Prahl said.

Will this walkout, and others across the nation, have an impact on gun control? McClain says that there is no way of knowing for certain. However, she believes that the least students can do is try to advocate for change. Whether or not change is made, Williams hopes that students come out with one clear message.

“I hope students take away from this demonstration the value of life and unity,” Williams said. “That we must come together despite differences.”