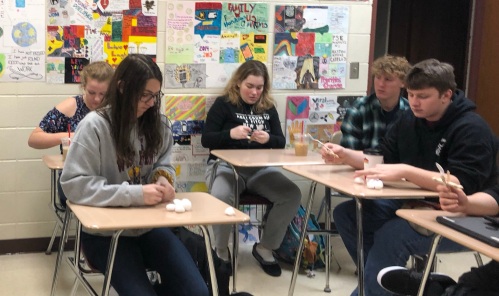 On Thursdays in the hidden J hallway, there is a group that makes catapults to shoot cotton balls!

Jessica Frederick, the coordinator of the organization, says that this organization has been around for over 40 years.

“We have been in Washington County since 1978,” Frederick said. “The program has grown and changed a lot over the last few years and now includes groups of peers at six different schools, monthly adult programs and a respite program for youth. We started in the schools about nine years ago when we had parents trying to find ways for their youth with disabilities to be more socially involved with peers in the schools.”

So far, the organization has programs at Silverbrook Intermediate School, Badger Middle School, Hartford High School, Kewaskum Middle School and Kewaskum High School, in addition to WBHS. This involvement in the schools has made a great impact on the students. Michael Herther, a teacher at West Bend West and the advisor of the group at WBHS, has seen bonds form in the short period that Citizen Advocates has been at the high schools, and he sees benefits for both the advocates and students with disabilities.

“You’ve got the advocates, who are getting the opportunity to go and work, build up a resume, and create those social skills that they’re going to use later in life,” Herther said. “Then you have the students they’re working with, who might not have a reason to come to school. They create that connection, then they have someone they can go and see and talk to. It’s just another positive engagement opportunity for students and gives them a reason to enjoy school.”

The students currently involved have been enjoying this program immensely. Many are excited to meet students outside their usual classes.

“In Citizen Advocates you hang out with people you wouldn’t typically hang out with,” East junior Jordyn Burke said. “It broadens your friend group and I think that’s my favorite part. Just making friends with the people I wouldn’t normally talk to.”

“It’s another positive engagement opportunity for students and gives them a reason to enjoy school.”
– Michael Herther, Citizen Advocates adviser

West junior Lily Mottet also enjoys being able to do activities outside the classroom in addition to meeting new people. During a meeting on April 18, the group was making catapults out of popsicle sticks and plastic spoons.

“We get to meet new people but we also get to learn in a non-traditional setting where we play games and make catapults out of popsicle sticks,” Mottet said. “It’s just a nice break in the day to have fun and have contact with other people. Not just me, you, a teacher and a textbook.”

As of right now, there are about 30 students in the Citizen Advocates program at WBHS. Herther and Frederick hope to raise awareness about the club and gain many more members. Their ultimate goal, however, is to create a mentorship program for those students who need a little extra help. Frederick also hopes to get students involved in community service projects.

“I just hope that people see the benefit of it, and that they can keep bringing more people in, because I don’t want it to become a secluded group,” Herther said. “I feel that the more word that’s out there, the more people will want to be a part of it. So I want to see it continue to grow.”

Frederick also has high hopes for the future of this group.

“The possibilities are pretty open and the students working together are going to be able to accomplish great things,” Frederick said.

Citizen Advocates is always looking for volunteers to help with a variety of activities. To learn more, visit their website http://cawash.org/.