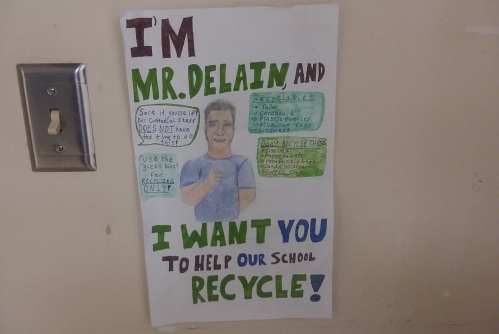 Custodians at the West Bend High Schools may be working harder to protect the environment than students realize.

Contrary to the popular belief that the school district does not recycle at all, the WBHS janitorial team has confirmed that student misuse of recycling bins is the only factor that limits the school’s ability to recycle. School staff claim that students throw their trash into the recycling bin or vice versa, forcing the janitorial staff to sort the materials.

West senior and student janitor Hunter Schicker says that he sees students abuse the recycling bins on a daily basis and must later take time to sort the trash from the recyclables.

“(Students) are not really doing a good job at it,” Schicker said. “They are just throwing their trash in the recycling bin in front of me.”

Ironically, multiple students claim that recycling is a beneficial practice for the planet, yet admit to throwing recyclable items into the garbage can instead of the recycling bin.

“I personally do not use the recycling bin for its intended use,” West senior Emily Kodell said. “If I see a bin with any form of trash, I throw my garbage in it.”

“I sometimes use it for its intended use, but not all of the time,” Klitzman said. “I just forget to use it sometimes and then I had already thrown away my thing in the garbage.”

Despite the impression that students do not recycle, many do, or at least try to recycle when they can.

“I do try to use the recycling bin when it’s available instead of throwing items away,” East junior Emily Nelson said. 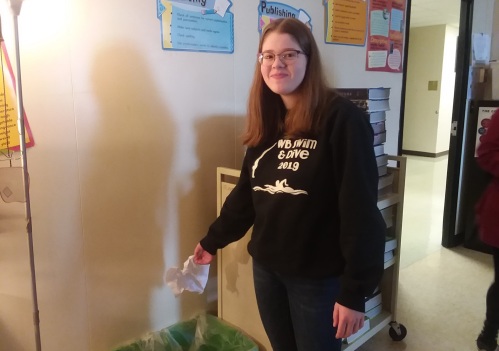 West senior Summer Macheel, the president of the WBHS environmental club called SEED (Saving Earth Every Day), frequently sees students put recycling in the garbage and believes that many students don’t recycle because they are too unmotivated.

West Advanced Placement Environmental Science teacher Paul DeLain claims that recycling is not only important for the environment, but is also a crucial life skill that youth should learn.

“It’s students that are going to inherit this planet and how you treat it now will determine the shape it’s in the future,” DeLain said. “Again, it’s more than just recycling, but if you can’t even recycle appropriately, how are you going to make the tougher decisions, the bigger decisions that have to be done?”

Like DeLain, Macheel says recycling is something that matters past students’ years in high school.

“It’s going to be something that you carry on into the rest of your life,” Macheel said.

DeLain said that recycling bins are found everywhere throughout the West Bend High Schools, from the cafeteria to the classrooms. In the cafeteria, there are special garbage cans created by SEED that have cutout tops, designed specifically for glass bottles and aluminum cans.

DeLain said that it is everyone’s duty to be caretakers of the planet.

“Being stewards of the planet is way more important than a lot of the stuff we’re learning in our classrooms,” DeLain said.

DeLain worries what will happen to the future if people don’t make an effort to recycle and take care of the planet now.

“There’s one thing we all have in common, and it’s that planet we’re on and it’s full of finite resources,” DeLain said. “As the earth’s population continues to expand, resources are going to become more and more valuable, so if we’re burying them in landfills when they could be recycled, I worry that our kids will wonder what we were doing.”

(Top image: A sign made by SEED hangs in Paul DeLain’s science classroom and shows what things students should and shouldn’t recycle. Photo taken Dec. 20 by Noelle Mentch, Current Staff.)