Maddison Baker never considered that before her first season of high school basketball had finished, she would be ranked as one of the best players in the state.

Baker is a West Bend West High School ninth grader who has become a valuable center for the girls varsity basketball team. Wisconsin Sports Network reports that Baker is the third best rebounder in the state.

According to WisSports, Baker averages 16.7 rebounds per game. As there are still four games left in the season, there may be some fluctuation in the rankings before season’s end.

According to head coach Bernie McCarthy, this season is the second best season West girls has had in the past 10 years. One reason for this success is Baker’s ability to rebound.

In the four years that McCarthy has been coaching girls varsity basketball, he has not had a player that has been on any of the WisSports ranking lists. Baker’s achievement is made more remarkable because she is a ninth grader playing varsity.

“I think that would be a big deal for any high school player, whether they’re a freshman through senior,” McCarthy said. “But certainly to have a freshman come in and do it is something that hasn’t been seen around West Bend in quite some time.”

Baker has been playing basketball since she was in the first grade, but high school basketball is a new challenge. However, Baker has proven that she has what it takes.

“Really all it is, is just different players and older players you’re playing against and that it makes me want to play better,” Baker said.

McCarthy has noticed Baker’s ability to adapt and her potential as a basketball player and as a teammate.

“Because of her natural ability, her willingness to work hard, and her eagerness to learn, she’s going to be an exceptional athlete” McCarthy said. 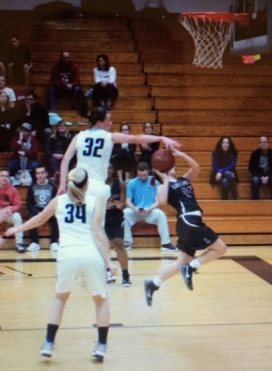 With this new attention on Baker’s ability to play, colleges have also begun to take notice. Although Baker isn’t sure if basketball is something she wishes to pursue in the future, she is still willing to give it her all. And yet this added pressure has not affected Baker’s game play in the least.

“I normally just play the game for the team,” Baker said. “And if the colleges notice, they notice.”

Even though Baker is the youngest among the girls on the team, they have all been very welcoming towards her.

“From the first day, pretty much, they’re all about it,” Baker said. “It was nice just to hang out with them and meet them for the first time.”

Point guard Katie Hayes says Baker has been a great addition to the team.

“She’s a great teammate and her rebounds really help the team,” Hayes said.

In addition to having a great relationship with her teammates, Baker also very much likes the coaching staff. Baker feels very comfortable asking McCarthy any questions she may have. Any advice he gives is well received.

In addition to the time and effort Baker puts into basketball, she also plays varsity volleyball and club soccer. Baker constantly switches between sports, homework, and other personal activities.

“It’s difficult jumping from practice to practice,” Baker said. “Honestly, after practice I go straight to a soccer game and after that I go to a volleyball practice. So it’s just getting that in there at the same time as getting extra stuff in there outside of that.”

After all of her accomplishments, Baker remains humble.

“I think any time there’s an individual award a portion of the credit goes to the other team members for helping them get to that,” McCarthy said. “And Maddison is awesome at recognizing that with her teammates.”

The entire West girls varsity team hosts Wisconsin Lutheran Thursday at 7:15 p.m. The final home game is Feb. 10 against Watertown at 7:15 p.m. Both games are in the Fieldhouse.

One response to “Baker Dominates the Boards”