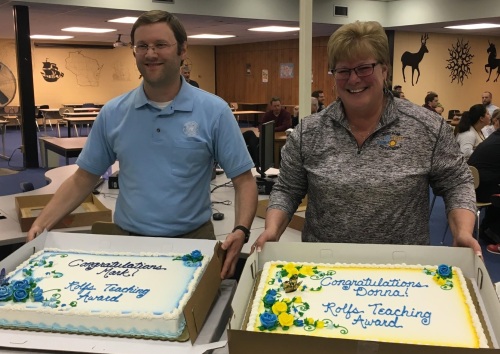 Two cakes were made for this year’s Rolfs award ceremony at the West Bend High Schools.

Staff members Mark Drake and Donna Goetz were each honored by the Rolfs Educational Foundation in a surprise event after school May 1 in the West High media center. Drake, who won Teacher of the Year, teaches US Government and Politics and World Affairs. Goetz, who won Support Staff of the Year, is the fulltime school psychologist at the high school.

Drake accepted the award with modesty.

“It’s a tremendous honor,” Drake said. “It shows that I have respect from some of my former students and my colleagues. It’s very surprising and very gratifying to be recognized by this wonderful group and to see your hard work pay off.”

For Kelsey Nowack, a West junior, it came as no surprise Drake was recognized as teacher of the year.

“Drake is passionate about what he teaches,” Nowack said. “He inspires his students to give their all in whatever it is they are doing.”

Goetz has worked in the West Bend School District for 14 years, and she was shocked to be awarded this year.

“It was very much of a surprise, quite honestly,” Goetz said. “I was really flattered.”

Goetz is well-liked by both students and her colleagues at the high school.

“It was very much of a surprise, quite honestly.”
– Donna Goetz

The Rolfs Educational Foundation has a long tradition of recognizing four district members each spring. One teacher is chosen from each of the elementary, middle and high school levels. In addition, one support staff member is selected from the district. Support staff include school counselors, secretaries, social workers and other district members.

Colleagues, students, and other community members nominate district members for these awards. Ultimately, the Rolfs Educational Foundation determines the final winners from among the nominated candidates, with input from previous recipients.

Drake is not only recognized for his teaching skills, but also his involvement in clubs offered at the high school.

Drake is the adviser for the Model United Nations team, as well as the co-adviser for the Mock Trial team. Drake is also very excited to be the adviser for a new club that will be introduced in the 2017-2018 school year. The program is titled the Global Education Achievement Certificate. It is also called GEAC, or Global Scholars for short. GEAC allows students to learn more about how the world functions politically, economically and culturally.

In recent years, the Rolfs award has been given to Jessica Flitter, Karen Wysocky, Cindy Mennig and Ryan Olson.

For staff members in the school district, it is a great honor to be recognized from among a group of dedicated and excellent educators.

“I think the high school staff is just spectacular,” Goetz said. “They are some of the most gifted and talented people that I know. They’re awesome and they’re very exciting to work with. I know of all of their talents and their expertise, so I was really flattered that I was able to be nominated for the award.”